Asian Journal
Home Hot Off The Press Container Truckers and Company owners protest at the Vancouver Art Gallery in... 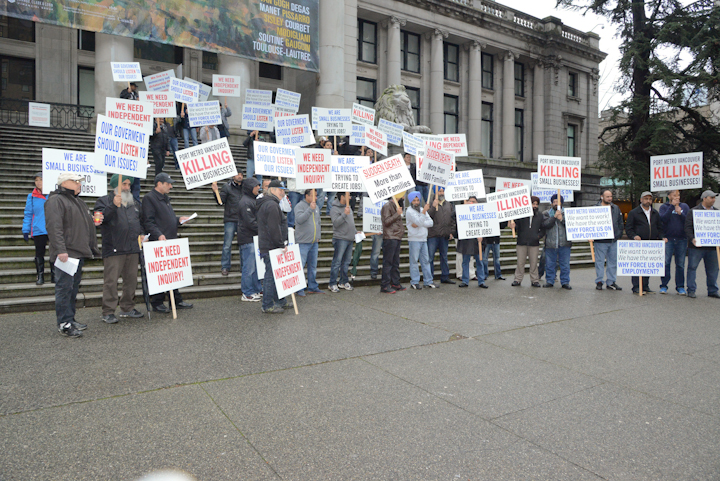 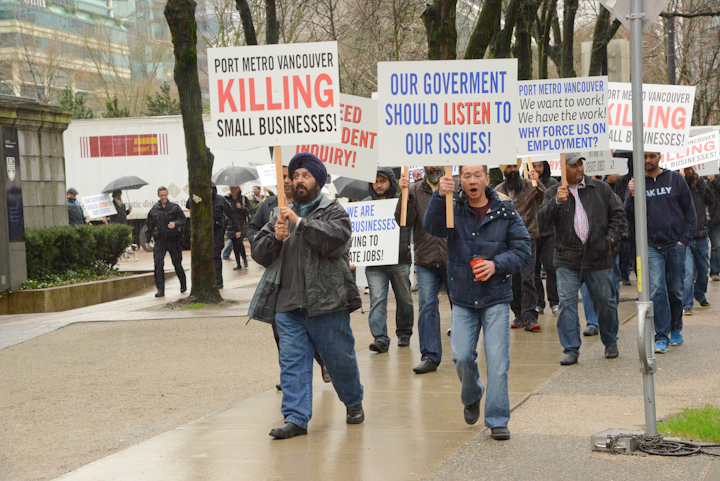 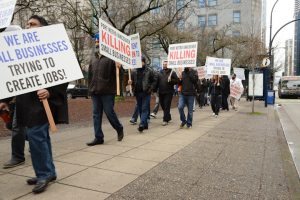 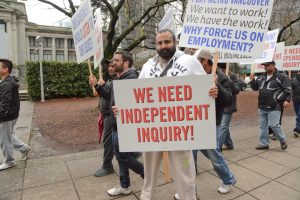 Vancouver: The sky was grey and several times in the noon hour the rain poured down on the sixty to seventy container truckers who gathered at the Vancouver Art Gallery in downtown Vancouver on Friday.  They were protesting the procedures used by Port Metro Vancouver (PMV) to decide on which companies and drivers would be licenced to service the port.  The result of a process they truckers claim seemed both arbitrary and lacking transparency was the loss of access by 68 companies and the loss of jobs by 600 drivers and an additional two to three hundred employees of these denied companies.

One of the protesters was Samuel Tam, Driver for KV Truck Line. He was asked, by reporter Ray Hudson, if anything further had developed in the cancelation of licences by Port Metro Vancouver:

“Not that I know of, but we think our the lawyer has sent a letter to the Federal Transport minister and we are getting a reply from them.  We are waiting for the court date to talk with Port Metro Vancouver.”

We then spoke with Jenny Lee, one of the owners of KV Truck Line, and asked her if they have heard anything new since last Friday?

“No, nothing for companies.  They have released some information on compensation for the drivers.  But as far as company owners, there’s nothing done for us. So all we can do is continue with the legal proceeding with our lawyer and we’re hoping that the federal government and Port Metro Vancouver will reconsider all the applications, because they have never done the whole procedure transparently. What decisions made them decide which companies could be approved and which ones not, because apparently many companies that were not previously serving the port actually were approved when in the past they were long-haul (truckers). So in that time it seems like they just passed whoever they wish, and there was no transparency in the whole program.  Also as a company owner we were given less than five days notice to shut down the company.”

How many people are involved in your company?

“We’re a small company so for us it’s about nine people. However it does still affect the company because we have been in the industry for over seven years and we did not expect our company not to be approved.  When they said they (PMV) had everything posted in December of 2014, giving us two months notice. That is totally not true because back in December 2014, they just said follow this guideline to apply and those who apply will be approved.  Then, all of a sudden on January 26th, in the afternoon, we got the email saying oh too bad you didn’t make it, your company is not approved. Less than five days.”