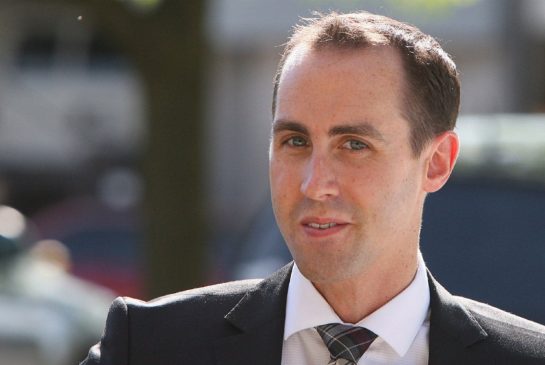 GUELPH, Ontario: Michael Sona, the former Conservative staffer convicted in the 2011 robocalls scandal, has been sentenced to nine months behind bars.

The Crown had wanted Sona, 26, to spend at least a year and a half in jail for his role in the successful plot to misdirect voters on the morning of the 2011 federal election.

Sona hung his head and typed on a BlackBerry, his family members beside him in tears, as Justice Gary Hearn delivered his decision.

Sona will also spend 12 months on probation as part of what Hearn called a “difficult and troubling sentence.”

His lawyer, Norm Boxall, had recommended a suspended or conditional sentence _ something Hearn said would have been “entirely inappropriate.”

Thousands of automated phone calls went out to citizens in and around Guelph on May 2, 2011, with incorrect information on where to vote. Liberal supporters received most of the calls.

Sona was found guilty of wilfully preventing or endeavouring to prevent an elector from voting, which carries a maximum penalty of five years in prison and a $5,000 fine.

Crown attorney Croft Michaelson asked for a harsh sentence in the range of 18 to 20 months to send a message to anyone who might consider committing election fraud.

Boxall recommended a suspended sentence or a six-to-12-month conditional sentence with house arrest, parole and a requirement to complete community service.

Boxall elected to call no witnesses in Sona’s defence, arguing that the Crown failed to definitively identify a culprit in the scheme.

Sona lacked the technical savvy to orchestrate the complicated plot, said Boxall. He argued that the Crown’s star witness _ Andrew Prescott, a colleague of Sona’s who had previous experience with ordering robocalls _ was a more likely suspect.

Prescott testified against Sona in exchange for immunity, but even Michaelson acknowledged his side of the story “should probably be approached with caution.”

Hearn said he found Prescott’s testimony inconsistent and “largely self-serving.” But he did accept the testimony from other Conservative staffers, who said that Sona openly bragged about ordering the calls.