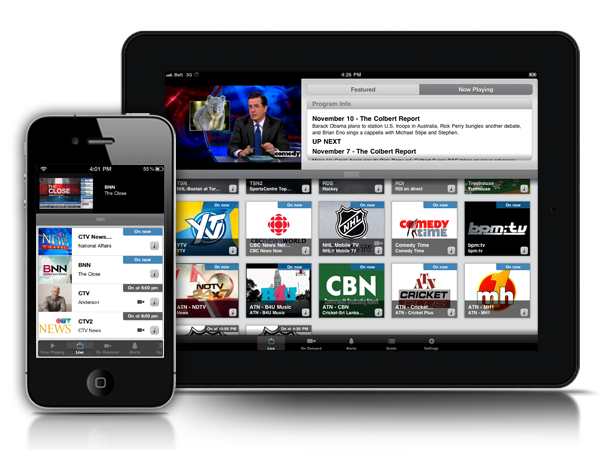 The Canadian Press
OTTAWA: Bell Mobility Inc., has been told it can’t keep offering customers preferential treatment for its mobile TV application while it appeals a ruling by the telecom regulator that would force it to scrap that pricing model.
Bell Mobility, which is owned by BCE Inc. (TSX:BCE), had asked the Federal Court of Appeal for an injunction while it appeals a decision by the Canadian Radio-television and Telecommunications Commission that it end its $5-a-month charge for Bell Mobile TV service.
The CRTC ruled in January that Bell can no longer exempt customers’ wireless data used through the app from their monthly caps.
The pricing arrangement originally allowed Bell customers to stream up to 10 hours of programming on their mobile devices without counting the usage against their monthly wireless data caps.
The plan was subsequently reduced to 5 hours of live and on-demand television programming on their mobile devices with no effect on monthly data caps.
The company argued that changing its billing practices would cause it irreparable harm.
But a Federal Court of Appeal judge rejected the argument, noting that Rogers Communications Inc. and Videotron Ltd. _ two of Bell’s competitors _ have already changed their pricing of similar apps.
Bell wouldn’t comment Monday on specifics of the ruling, other than to say it will continue with its appeal against the original CRTC decision.
Critics of the data-cap pricing model said it gave Bell the power to artificially inflate the price of independent services like Netflix while denying consumers choice on a level playing field.
Bell says there is no evidence that the pricing model harms consumers.
The advocacy group OpenMedia welcomed the court decision, calling it “good news for Canadians.”
“There’s no doubt Bell was hoping to maintain the power to pick and choose what we see online in the years it could potentially take to resolve this case,” said OpenMedia campaigns manager Josh Tabish.
“Today, they lost that power.”
© 2015 The Canadian Press