Asian Journal
Home News Cricket and Bollywood’s nexus is the story of Azhar – By Kamal... 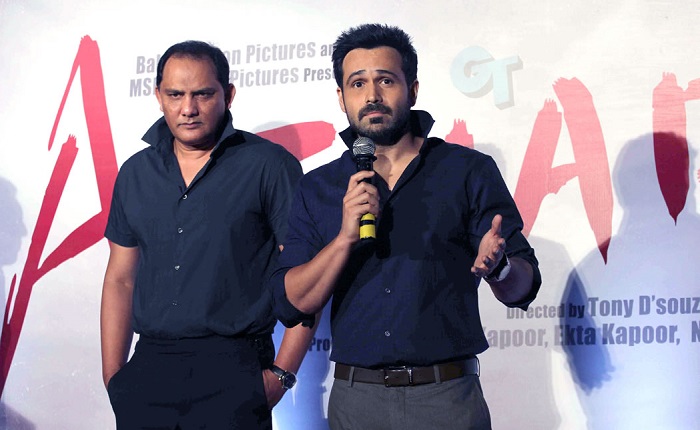 d cricket go hand in hand and without doubt the cricketers and Bollywood stars are most popular in India. However, it wasn’t untill 1959 that S. Mukherji’s Love Marriage (1959) featured hero Dev Anand as a cricketer wooing heroine Mala Sinha, introducing cricket to the general populace. Kabaddi, wrestling and other popular sports like soccer remained the most commonly featured sports in Bollywood but all that changed after India’s maiden triumph in 1983 World Cup Cricket and overnight, the cricketers became the new Gods!

Kumar Gaurav, India’s chocolate hero and the favourite of youngsters after the super success of Love Story, Teri Kasam and Star, took the avatar of cricketer in Mohan Kumar’s All Rounder (1984) and Kabhi Ajnabi They (1985) saw the swashbuckling cricketer Sandip Patil romancing Poonam Dhillon but credit goes to Dev Anand again for making cricket themed Awwal Number (1990) with Aamir Khan, Aditya Pancholi and Ekta Sharma. However, all these films failed miserably at the box office.

India’s meteoric rise in the world of cricket ignited the passion in Bollywood again and the super success of Aamir Khan’s Lagaan (2001) set the tone as the film swept all major awards and went on to represent India in the Foreign Film category, losing narrowly at the Academy awards. There after fours and sixers started raining heavily in Bollywood as almost 12 cricket themed movies were made from 2001 to 2015 and some of them li

Born and raised in Hyderabad, Azharuddin made a spectacular entry in world cricket as he scored three centuries in three tests, a world record which still stands in his name, and went on to become the most successful Indian captain until Saurav Ganguly broke the record. His phenomenal rise in cricket, divorcing first wife and romancing and marrying the popular heroine Sangita Bijlani (Salman Khan’s ex-girlfriend) and subsequent expulsion from cricket in 2000 after charges of match fixing, was definitely the material for a movie and after much coercing, Azhar is ready for world wide release on May 13th.

Already the film is embroiled in many controversies as it’s said that Sangita Bijlani, Nargis Fakhri (who’s Sangita Bijlani in the movie) and cricketer Manoj Prabhakar are not happy with the final product and may move the court but whatever the case may be, there’s no doubt that everyone wants to see the story of Mohammad Azharuddin, who went on to win the general elections as MP from Moradabaad (2004 – 2009), on Celluloid to see the rise and fall of one of India’s most famous cricketers.

QUIZ: How many cricketers have been seen in Bollywood Films??

India and the world is waiting for Aishwarya at Cannes

India’s Aishwarya Rai Bachchan will be making her 15th appearance at 69th Cannes International Film Festival and the whole world is waiting anxiously to see Miss World and L’Oreal model at the French Riviera on May 13 and 14. Aishwarya’s first appearance was with Shah Rukh Khan to promote Sanjay Leela Bhansali’s Devdas (2002) and ever since, her appearances have been the subject of much interest amongst the photographers from around the world.

Her solo appearances before and after the birth of daughter Aradhya and appearances with husband Abhishek Bachchan or even with father-in-law Amitabh Bachchan have been scrutinized extensively, and as she promotes her upcoming film Sarabjit, it is to be seen how well she’ll score again at the Red Carpet of 69th Cannes International Film festival! Meanwhile, Sonam Kapoor, Mallika Sherawat and Amy Jackson are some of the other prominent names to be seen at Cannes.

The Jungle Book has been declared a blockbuster hit all over India and needless to say that the Hollywood film was responsible for the dismal showing of Shah Rukh Khan’s Fan and putting a halt to the surging Ki and Ka and Kapoor and Sons at the Indian box office. Well, the trend continued as Hollywood’s Captain America did exactly that as it slowed the winning march of Baaghi and blanked 1920 London, Traffic and Sunny Leone’s One Night Stand.

While The Jungle Book has already collected Rs.170 Crores, Captain America is surging

towards Rs. 50 Crores in the first week and with some blockbusters expected in coming weeks, it seems that Hollywood will continue to grow and may even push Bollywood aside. The success of Baaghi has been celebrated with the announcement of Baaghi 2, and it is said that the entire film with the same cast will be shot in Shanghai, China in coming months.

Bipasha Basu and Karan Grover are still celebrating their honeymoon. Marriage rumours are getting stronger for Salman Khan as he was seen with his Romanian girlfriend in Mumbai recently.

Much is expected from this week’s releases of Azhar, Aakhri Sauda, Buddha In A Traffic Jam, Chudail Story, Dear Dad and Khel To Ab Shuru Hoga.

With that, it’s time to say goodbye but not before reminding you all to watch this week’s Yaadein of Lahore’s Bollywood connection on Sunday, May 15nth at 1 pm on SMC#116.