Asian Journal
Home Headlines Crisis deepens in JD-U, may be headed for split 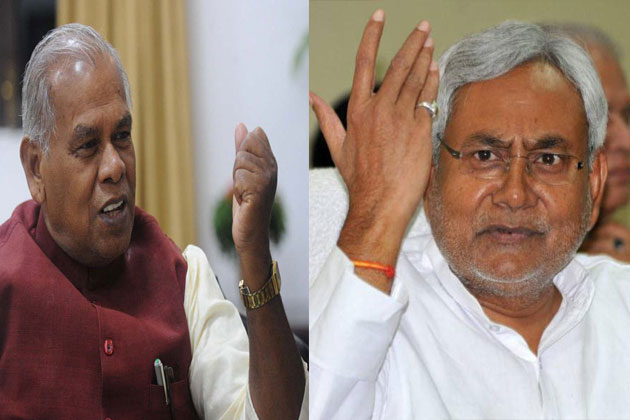 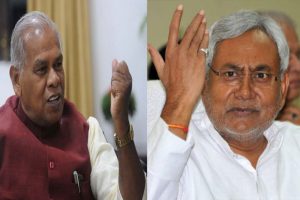 Nitish Kumar’s supporters and Manjhi and his backers in the party Friday locked in a war of words, with the chief minister terming the Sharad Yadav-convened meeting of the JD-U legislature party Saturday as illegal and unconstitutional and Nitish Kumar camp threatening to take action against Manjhi.

Manjhi, who earlier refused to resign, called a counter-meeting of the JD-U legislature party Feb 20.

Amid speculation that the JD-U is heading for a split, Manjhi’s supporters also clashed with some supporters of Nitish Kumar near the JD-U office on Birchand Patel Marg here, leaving at least 12 people injured.

The clashes broke out when Manjhi’s slogan shouting supporters burnt an effigy of Nitish Kumar and shouted slogans against the former chief minister, police said.

“Dozens of Manjhi supporters entered the JD-U office and tried to ransack it and damage the property,” a police officer said.

Manjhi’s supporters took to the streets after JD-U national general secretary K.C. Tyagi Friday said Manjhi would be replaced by Nitish Kumar and action would be taken against him for describing the legislature party meeting called by Sharad Yadav as unconstitutional and if he fails to attend it.

Manjhi Friday targeted Tyagi by describing him as a “pagal” (mad) and ‘Yamraj’. He said no one can remove him and he would continue to be chief minister.

Manjhi announced that he would fight any move to remove him.

Manjhi also hit back at Nitish Kumar by describing him as ‘Bhism Pitamah’. “Nitish Kumar is behaving like Bhism Pitamah of Mahabharat as he is not opening his mouth and maintaining silence over ongoing development in the party,” Manjhi said Friday in Khagaria district.

In a related development Friday, Sharad Yadav urged Bihar Governor Keshri Nath Tripathi not to accept Manjhi’s any recommendations as he does not enjoy support of majority of party legislators.

“Sharad Yadav in a letter to the governor informed him that Manjhi does not enjoy support of majority of party legislators,” a JD-U leader said.

The JD-U leadership is fearing that Manjhi may recommend the governor to dissolve the Bihar assembly ahead of his likely replacement.

Earlier in the day, Tyagi said a majority of party leaders, including legislators, were with Sharad Yadav and Nitish Kumar.

He, however, added that the JD-U leadership never expected that Manjhi would openly revolt against the party’s decision.

Tyagi said: “We never expected that Manjhi will openly revolt against the party’s decision.”

Tyagi told IANS here that the party was uncomfortable with Manjhi’s repeated controversial statements that damaged the party’s image among people. “Manjhi is not above the party and the party’s decision is final and supreme.”

“Manjhi is in minority and Nitish Kumar enjoys support of majority in the party,” Tyagi added.

Two ministers, Brishen Patel and Nitish Mishra, Friday declared their support to Manjhi and said they would not attend the legislature meeting called by Sharad Yadav.

Patel and Mishra are considered close to Manjhi. Last month, JD-U spokesperson Alok Ajai sought their resignation as they were allegedly planning to join the Bharatiya Janata Party (BJP).

“I am with Manjhi… Manjhi himself has declared that he won’t attend the legislature meeting,” Mishra told media after meeting the chief minister. “Only Manjhi is authorised to call the JD-U legislature party meeting.”

Health Minister Ramdhani Singh said the JD-U would elect its new leader in the legislature party meeting Saturday called by Sharad Yadav. “We do not accept Manjhi as our chief minister any longer,” he said.

Nitish Kumar is yet to say anything about the ongoing developments in the party.

“The RJD is with JD-U and it will support the decision of the JD-U legislature party meeting that was called by Yadav,” Lalu said. “Nitish Kumar is a shrewd man. He will take right decision over the issue.”

It is supported by 24 legislators of RJD, five of the Congress, one from the Communist Party of India and two Independents, making it a total of 147 — more than the 122 needed for a simple majority.

The BJP has 88 legislators and it has the support of three Independents. Five seats are vacant.