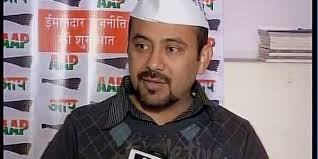 New Delhi, July 22 (IANS) Aam Aadmi Party (AAP) leader Dilip Pandey late Tuesday said a Delhi Police van tried to run him over while he was talking to mediapersons outside Rajendra Nagar police station here.
“I m shocked that Delhi Police is trying to eliminate me,” Pandey told IANS over phone. “I was luckily pushed away by one of the volunteers.”
Pandey said he was briefing mediapersons outside the police station when all of a sudden a van came towards him.
“Shocked to see sad state of Delhi Police. A police bus tried to run over – kill me from behind while I was talking to media. Someone pushed-saved me!” Pandey tweeted.
“A police van tried to run over AAP leader Dilip Pandey while he was talking to the media at Rajendra Nagar Police Station,” the party said in a Facebook post.
“Just had a word with @dilipkpandey. Shocking to know that Delhi Police is now trying to eliminate us,” AAP spokerperson Raghav Chadha tweeted.