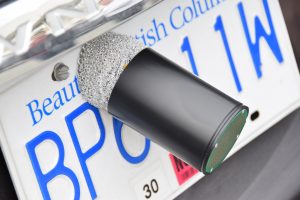 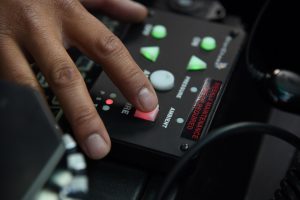 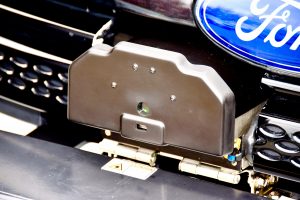 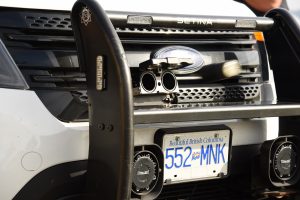 Delta Police now have new technology in their fleet to assist in tracking vehicles that fail to stop.

Early 2016 the Delta Police began to research options to address the increasing number of “fail to stop” incidents that were occurring. It is very frustrating to have limited capacity to capture those that flee from police and we needed to seek out available tools to combat this issue.

One option, StarChase Pursuit Management Technology, caught the attention of the Delta Police. Conversations were initiated with the company but realizing the inherent cost associated to incorporating this technology, the Delta Police Foundation stepped up and agreed to fund the project.

Over the course of the past several months, a team of officers and fleet mechanics have worked with StarChase personnel, which has resulted in eight police vehicles in the Delta Police fleet being equipped with this StarChase technology. The technology essentially launches a GPS projectile from the grill of the police vehicle onto the offending vehicle allowing police to track the vehicle while not engaging in a pursuit and coordinating additional resources to engage with the occupants of the vehicle when it is stationary.

With officers trained, protocols in place and equipment installed, the technology is in place for operational deployment.

Chief Dubord says, “We certainly appreciate the support of the Delta Police Foundation in funding this project. We are now looking forward to seeing this technology in action. However, we do recognize there is no one tool that serves as a “silver bullet” to solve any one issue. I do believe it is incumbent on us to employ advanced technology options that may assist us in our efforts to be effective at doing our job while mitigating risk to the public. The Delta Police will be assessing the workability and functionality of the technology in operational environment over the course of this next year.”

Once adhered to a suspect vehicle the GPS (web based) tracking allows police to fall back and monitor the location of the vehicle and deploy resources once the vehicle is stationary.