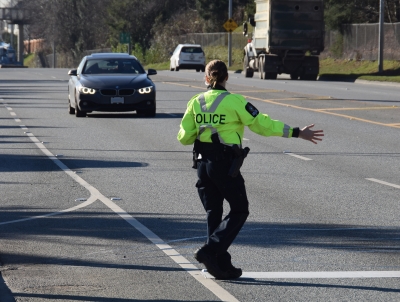 Delta: The strip of road connecting two very busy highways – Hwy 17 and Hwy 91 – was the number one spot for collisions in Delta in 2018.

“We are releasing the top 10 collision areas because we want the public to know why we are focussing our enforcement in these areas,” says Sgt. Sukh Sidhu, head of Delta Police Traffic Services. “The hope is  that the public will take this information and drive a bit more carefully in those locations, knowing history has shown there’s a greater chance of getting into a crash there.”

The top ten list takes account of all collisions attended by Delta Police, and includes everything from fatalities and serious injuries to minor injuries.

With its location on the Fraser River, access to ferries, an extremely busy port and easy access to parts of Metro Vancouver, Delta sees a significant amount of vehicle and commercial traffic on its highways and roads. The top ten collision locations are:

“Our community has consistently told us that traffic enforcement is one of their top concerns,” says Sgt. Sidhu. “That’s why beginning in late 2017 we began to increase the amount of enforcement we were doing, as well as ensuring that enforcement was targeted to areas where we see high collision numbers. And because what gets measured gets done, we’re also tracking that targeted enforcement internally, so we know exactly where our officers are doing that enforcement.”

In an effort unique among BC police departments, the Delta Police Traffic Services announces enforcement efforts in advance approximately once per week, via its Twitter account @DPDTraffic. The Twitter account was launched in spring 2018 and provides an additional way to increase awareness of good driving habits among the public.

“Though we do have a few people who are less than thrilled with our enforcement and aren’t shy about sharing their opinion on social media, we’ve also found that most people are very supportive,” says Sgt. Sidhu. “And to prove we have a sense of humour too, we held a few ‘Tell us where to go’ initiatives – which were our most popular events last year.  We’ll be bringing it back again this year. It’s important to us to respond to the concerns of the community.”