After months of watching the building at 80th and Scott Road climb into the sky, the 37 story Delta Rise was officially opened to the public in a ceremony attended by Delta Mayor Lois Jackson, George Harvie, CAO of Delta, Delta Councillors and other community members. This landmark building is the first development to receive a property tax exemption through Delta’s Scott Road Revitalization Bylaw, enacted in 2012, to attract investment along the Scott Road corridor.

“Delta Rise is a major investment in our economy and I am extremely pleased to be a part of this event,” said Mayor Lois E. Jackson. “This project speaks volumes about the type of development that can emerge through innovative policy and determination.”

As a Delta-based developer, directors of Maple Leaf Homes, Satish and Hari Sharma, echoed the positive sentiment on the future of Delta and showcased Delta Rise as a symbol of the revitalization of the community adding it was a new type residential offering for North Delta.

“With a host of amenities and transit within footsteps, we envision North Delta as being a hub and ideal spot to live, that people will gravitate to,” said Hari Sharma, Maple Leaf Homes’ Principal and developer behind the Delta Rise. 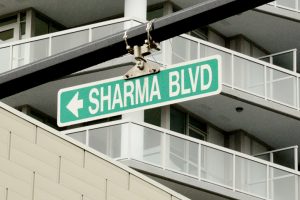 The development provides residents with amazing views of the lower mainland and beyond from the 317 single-level homes. It includes an outdoor park and recreation space for residents well above street level. Efficient floor plans and European inspired kitchens have drawn significant public response and will become home to a vibrant, intergenerational community and directly contribute to Delta’s plans for revitalization of the corridor. This residential offering currently missing in the area, will allow citizens to age in the community and retain a Delta address, even as their needs change. There is also a new street, Sharma Boulevard, for southern access to the Delta Shopper Mall.

Coming soon, an in-depth interview with Satish and Hari Sharma and other developments from Maple Leaf Homes.