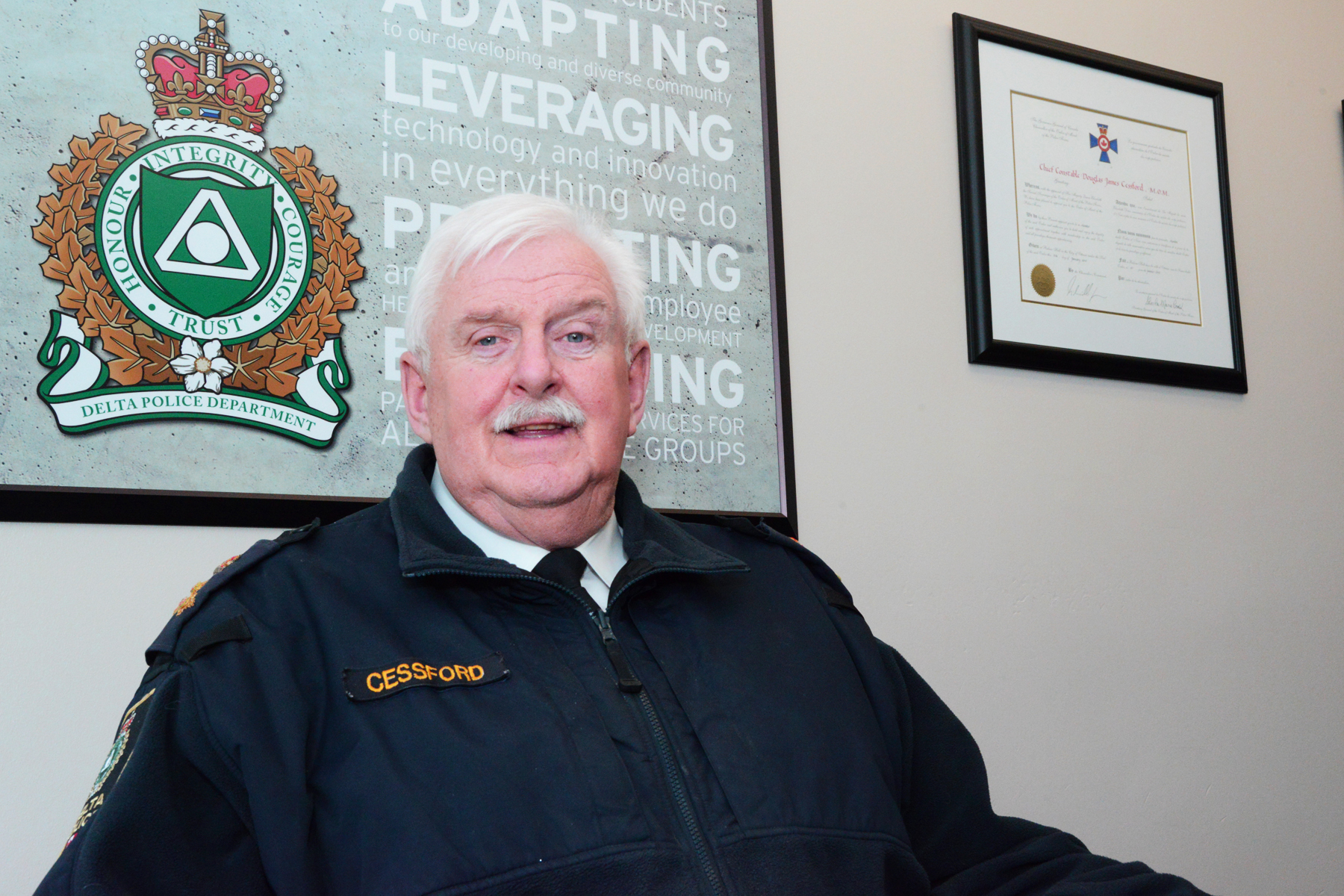 Delta: On February 2, 2015, Jim Cessford, a twenty-seven year veteran of the Edmonton Police Force, and Chief of the Delta Police for the past 20 years will leave his post to leverage his 47 years of policing experience into a Masters Degree on the very thing he has practiced so successfully here, Specialized Policing versus Community policing. Just ahead of this momentous change Chief Cessford spoke about his career and future direction of policing with Ray Hudson.

“I’ll take a month or so and my wife and I might do some traveling just to relax a bit, then I’m going to get at it again,” said Cessford. “I’m a strong advocate of community policing and the importance of having a close relationship with the community. I believe it’s not up to us to tell the community what their needs and issues are, we need to have them tell us. Policing should be done with the community, not to the community. So I will write and talk on that.”

I played basketball and football on the high school teams, against the police teams. I was noticed and they came after me to join. I passed the entrance exams and was appointed as a cadet at seventeen and a half years old, working in the office when I wasn’t playing sports on the police teams. At nineteen they put me into training, then out walking a beat. The drinking age was 21 and I was just barely twenty, so technically speaking I had no right going into bars, but as a police officer I had to, to break up fights.   I was made a full constable and I walked the beat for two years, which was something in January in Edmonton where, in one instance it hit minus 90 degrees with the wind chill. One of our duties was to ‘shake doors,’ to make sure they were locked. It was so cold that when we’d turn a handle it could snap off. We’d hope someone had forgotten to lock their door so we would have to guard the place, in the warmth, until someone arrived.

Walking a beat I also developed the skill of talking with people. Sometimes out there by myself, I ran into dangerous situations. I was thankful I could talk because otherwise it would have been very problematic for me.

After the beat, I worked on patrol, did a lot of work as a school liaison, then moved to major crimes for 14 years including being a hostage negotiator. In fact, I was the hostage negotiator when Peter Pocklington, the owner of the Edmonton Oilers, and his family were taken hostage. I negotiated that for 12 hours. At the end of the day we had to take action and we ended up shooting and wounding the accused. It was a unique experience for me which I used well in training hostage negotiators from all over the world on commanding high risk incidents and how to be a negotiator. I’ve trained some of the highest profile negotiators in the world. I take a lot of pride in that.

When I was in charge of the Downtown division in Edmonton, one of my key people was a young fellow, Cst. Ezio Faraone, whom I was coaching and mentoring. One day, I got a call from the Chief saying there had been an incident and that we’d had an officer shot and killed in a bank robbery. It was Ezio. The police had the bad guys trapped, and I was sent to take command and to negotiate. Sadly, when I arrived on the scene Ezio was still lying there. Five or six years later, as Delta’s Chief, I came across Ezio Faraone’s name. He’d started his policing career here as a Reserve Constable, and as Delta wasn’t hiring at the time, he got on in Edmonton where I worked with him. Just a few weeks before he was killed, he had signed a plaque for me since I was being transferred. And I always keep that plaque on my desk to remind my officers that we need to be safe, that we need to be careful with what we are doing. 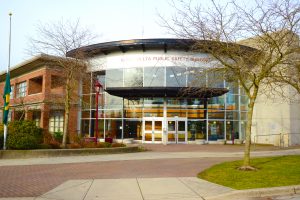 This community is absolutely incredible, and the people here are super. The municipality is three distinct town centres, Ladner, Tsawwassen and North Delta, separated by large amounts of agricultural lands.   When I came here we had about 200 square feet of office space in North Delta, and I told the Police Board at the time that I couldn’t come here unless they committed to building a police facility in North Delta. Sixty to Sixty-five percent of our work in the Delta Police Department was done in North Delta where we had no presence. Our members started their shifts at the main station in Ladner, then drove up to North Delta to work. Thanks to the Council and Police Board we opened our public safety building in June of 2001. There are approximately 125 people work out of that building now.

I’m often asked how we keep our crime rates so low. It’s about Community Based Policing and it’s about being out in the community. I expect our officers to be very proactive. I expect our police officers to take on the criminal element, to be in their face, to find out what they’re doing and why they’re in our community. We’re very proactive that way. We have a reputation with the bad guys who say ‘don’t go to Delta because the Delta Cops are jerks,’ If the bad guys don’t like us, I’m okay with that. It’s not a popularity contest.

When I came in 1995, we were 131 officers. We are now 185 sworn officers including secondments, 30 reserve constables and 72 civilian staff. On top of that, we have about 400 volunteers who work in our community police stations, do speed watch, home security checks, among many activities.

Through attrition, retirements, secondments and various things, we’ll bring in 10 to 15 officers per year. It’s rare to have members move to other forces, rather, we have officers from other forces who want to come here, including RCMP.

We’ve developed a strong technical base and we have first class equipment for our people. We’ve dramatically increased our training which is now second to none.

I’m pleased to say that our crime rate is one of the lowest in Canada for being a large city, which is how we are classified. 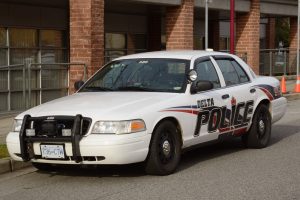 Policing in a multi-force region

I often hear concern about the patchwork of local policing around the lower mainland, and if we’d be better served by a Metro force. I understand that, but simply stated there are two forms of policing, Specialized and Community-based. The Specialization model is needed for gangs, sexual exploitation, cyber crime and so on. Then there are the community policing needs and I can tell you the policing needs for North Delta are different again from the needs of Ladner, Tsawwassen and Tsawwassen First Nation, our industrial areas and ports. And our policing needs are different again from those of Vancouver and New Westminster.

The people in Delta want their own police. They aren’t interested in a Metro Force. Bigger is not better. I’ve talked with police chiefs and the concern is if there’s a big event somewhere, all the resources for Delta could be redirected to the other community with the issue. What would we be left with here? At least this way I can manage what resources I have here. Did we help out with the Stanley Cup riots? Absolutely! But I was in control of the resources we sent to the riots because I had issues here too; reasons why I don’t support regionalization.

I support specialized policing, where we put all our specialized people together in a regional integrated unit, and they provide those specialized services.

If you asked the people of Delta what their greatest concern is right now, they’ll tell you it’s traffic, not gangs and those things. We work very closely with the Surrey RCMP and we back each other up at calls on a regular basis. We have a really good working relationship with them. They are a big city force and their needs are much different than ours. The issues are still the same with the same kind of crime, but we employ different policing models.

I think that technology will continue to be a huge aspect of policing, both on the criminal and crime fighting aspects. We are moving from criminals kicking in your front door and smashing windows, to people coming in through your computer. They’re still getting into your house and they are stealing from you and they could be a thousand miles away. So from property crime, which is still an issue, we are seeing a change to more and more cyber crime. That’s a big growing issue.

Mental health issues are huge for us. In fact mental health issues for the police are endemic right across the region, the nation and beyond. I have friends who are chiefs in the UK and they’re saying the same thing. I think that some of our mental health issues are a result of drug and alcohol use, and there’s a direct connection in a lot of cases. I also believe one of the big risks for all police agencies will be dementia. I see that as the next big threat, the aging of the baby boom generation. We are already going to a lot of calls where people don’t know where they’re from, where they live, they’re confused. We will have to look after our seniors, and be cognizant of this dementia issue as it will grow and become a bigger problem.

Chief Cessford is retiring as top cop, but he’ll be back!

Chief Cessford received the Governor General’s First Bar for 40 years of Exemplary Police Service, was named Citizen of the Year by the Delta Chamber of Commerce in 2009, was granted the Order of Merit for Police Services in 2010 by the Honourable Governor General Michaëlle Jean, and the Queen’s Diamond Jubilee Medal in 2012 for his continued and outstanding service.

In a future article we will explore Chief Cessford’s view of how the Justice System, morphing into a legal system, has failed both the police and the general population they are tasked to protect.