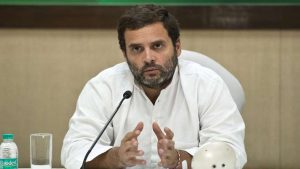 Mumbai: Flaying the Centre for the demonetisation of Rs 500 and Rs 1,000 currency notes, Congress Vice-President Rahul Gandhi said on Tuesday that “it was based on one person’s thinking and could turn out be a mega scam”.

“The big black money players have been allowed to go scot free by the Prime Minister.. People like (Vijay) Mallya and Lalit Modi are sitting abroad,” Gandhi said, speaking to mediaperons here late on Tuesday night.

He claimed that most economists with whom he discussed the issue said the demonetisation decision of November 8 was not thought out properly and was based on “one persons’ thinking.”

Gandhi, who arrived here late in the evening in connection with a court hearing in Thane on Wednesday, was interacting with mediapersons at the MCA Club in Bandra.

He also attacked the BJP for depositing Rs 1 crore in a bank account in Kolkata on the same day the demonetisation announcement was made.

Instead of demanding a rollback of demonetisation, Gandhi said the government should ensure implementation of it with “sensitivity”.

“Do you see any black money players in the queues. It is only the farmers, government servants and common man,” he said.

He said there was no economic rationale behind the decision.

Rahul Gandhi also refused to comment on Prime Minister Narendra Modi’s mother going to a bank in Gandhinagar to exchange her demonetised currency. “Mine and Narendra Modiji’s style is different. I won’t speak on his Mataji,” he said.

“A couple of days back, the PM was laughing in his speech, then next day he was crying. He should decide what he wants to do,” Gandhi added, referring to Modi’s different speeches on demonetisation.

“I am seeing on social media that BJP leaders are holding cash stacks in their hand, where did they get this money from?” Gandhi asked.