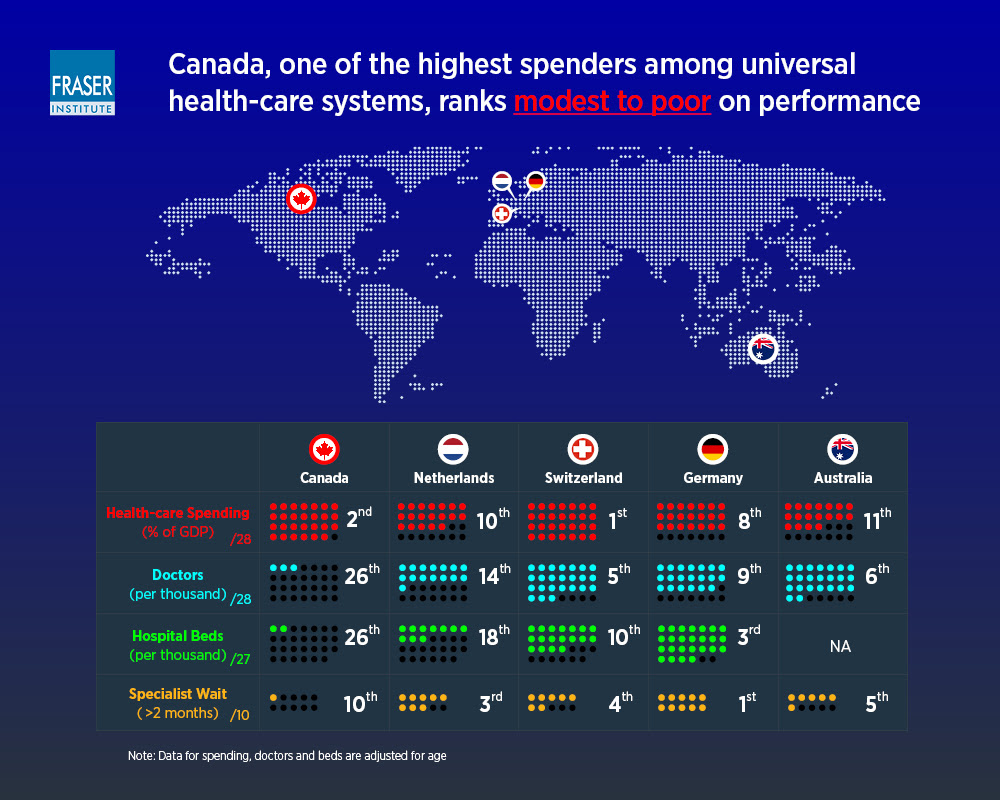 VANCOUVER—Despite spending more on health care than most other developed countries with universal coverage, Canada has a relatively short supply of doctors and hospital beds—and the longest wait times, finds a new study released today by the Fraser Institute, an independent, non-partisan Canadian public policy think-tank.
“Canada’s health-care system remains one of the most expensive in the world yet struggles with a comparative dearth of medical resources and comparatively long wait times,” said Bacchus Barua, associate director of health policy studies at the Fraser Institute and co-author of Comparing Performance of Universal Health Care Countries, 2019.
The study compares 28 universal health-care systems in developed countries, spotlighting several key areas including cost, availability and use of resources, access to care and the health of Canadians.
In 2017, the latest year of comparable data, Canada’s health-care spending as a share of GDP (11.1 per cent) ranked second highest (after adjusting for population age) behind only Switzerland.
But again, despite the high cost, availability and access to medical resources in the Canadian health-care system is generally worse than in the comparable countries.
For example, Canada ranks 26th (out of 28 countries) for the number of doctors (2.8 per 1,000 people) and 26th (out of 27) for the number of hospital beds (2.0 per 1,000 people).
Canada ranks 21st (out of 26) for the number of Magnetic Resonance Imaging (MRI) machines with 10.4 MRIs per million people, and 21st (out of 27) for CT scanners with 15.9 scanners per million people.
And on the wait-time front, among the 10 comparable universal health-care countries, Canada ranks last with the highest percentage of patients (30 per cent) who waited two months or longer to see a specialist, and the highest percentage of patients (18 per cent) who waited four months or longer for elective surgery.
“To improve Canadian health care, policymakers should learn from more successful universal health-care countries, for the benefit of Canadians and their families,” Barua said.