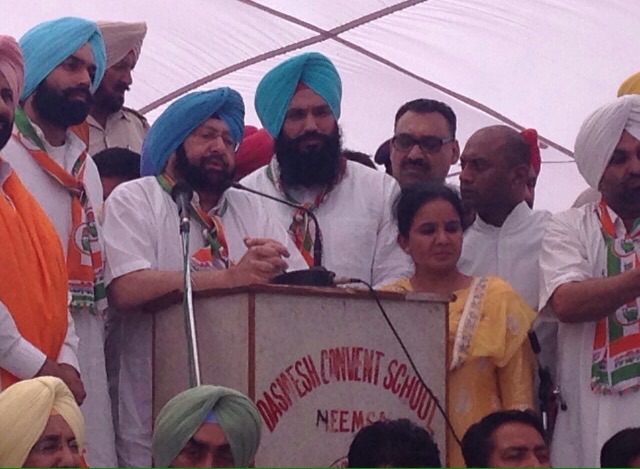 Dhuri (Punjab): Congress Deputy Leader in the Lok Sabha Capt Amarinder Singh said that the Dhuri byelection will set the tone for the 2017 assembly elections and mark the beginning of the end of the Akali-BJP regime. “It will sound the death knell for Akalis”, he declared here today at well attended public rallies in different villages.
Capt Amarinder made a grand entry into Dhuri ahead of a long convoy of vehicles and a long stream of people that generated the mood in favour of the Congress-Sanjha Morcha candidate Simarpartap Singh Barnala.
They included about 30 MLAs and about 50 ex-MLAs and ministers.
Addressing a series of meetings in villages Meemsa, Ghanauri and Kanjli, Capt Amarinder said that the time had come for the people to teach this government a lesson. He reminded the people here as how the Akalis had outrightly ignored Dhuri for three years. “Only now he woke up to dole out promises to you in view of the byelection”, he told people here while adding, but these are all false promises.
He pointed out that the Akalis had made similar promises before 2012 and were yet to implement any of these promises.
Lashing out at Mr Badal for mortgaging the interests of the state for his personal interests, he said, he (Mr Badal) had forgotten the problems of the farmers and had meekly followed the BJP diktats by supporting the anti-farmer Land Acquisition Act of the NDA regime.
The former Chief Minister asked Mr Badal as why has he maintained criminal silence over the FCI’s decision to reduce the purchase of wheat by 50 percent. This way, he warned, the farmers will be left at the mercy of the private buyers. He said, Mr Badal will be responsible for this.
Making a fervent appeal to the people of Dhuri to elect Simarpartap Singh, the joint candidate of the Congress and Sanjha Morcha, Capt Amarinder said, he was young, promising and educated who had given up his lucrative legal practice to serve the people of Dhuri.
Compared to Simarpartap, he pointed out, the Akali candidate Gobind Singh Longowal was not even properly qualified to represent Dhuri. He said, Gobind Singh Longowal had betrayed his own mentor Sant Harchand Singh Longowal by backing out from the witness. “If he could not be true to his mentor who treated him like his own son, how can he be true to you?” he asked.
Among those present on the occasion included Kewal Dhillon, Brahm Mohindra,Rana Gurjeet Singh, Tripat Rajinder Singh Bajwa, Rana Gurmeet Singh Sodhi, Sukhjinder Randhawa, Ramanjit Singh Sikki, Balbir Sidhu, Karan Kaur Brar, Sadhu Singh Dharamsot, Hardayal Kambhoj,Rajneesh Babbi, Sanghat Singh Gilzian, Gur Iqbal Kaur, Mohamad Sadiq, Navtej Cheema,Gurkirat Singh Kotli, Ajaib Singh Bhatti, Joginder Singh Panjgraian, OP Soni, Dr Raj Kumar Verka, Sukh Sarkaria, Amrik Dhillon, Sunder Shyam Arora, Rana KP Singh, Chaudhary Jagjeet, Aruna Chaudhary,  Laly Jawandha, Jasbir Dimpa, Raman Behal, Pawan Dewan, Ms Surjeet Kaur Barnala, Gagganjit Singh Barnala, Gurpreet Bhatti from Sanjha Morcha and others.