Mont-Tremblant, Québec: The fifth and sixth rounds of the Nissan Micra Cup took place this past weekend at the Circuit Mont-Tremblant, in the majestic Laurentides region of Quebec. Spectators were not given much time to appreciate the beauty of their surroundings as the Nissan Micra Cup drivers treated them to two spectacular races. By the end of Saturday’s race, the Nissan GT Academy drivers, Abhinay Bikkani from India and Thanaroj Thanasitnitike of Thailand, finished in first and second place respectively in a tight battle that saw the first six cars cross the finish line within 2.5 seconds. On Sunday, the order of the first five cars was identical to that of the previous day, with Bikkani earning full points.
Taking advantage of the Nissan Micra’s exceptional driving agility with panache, the 25 drivers entered in this doubleheader, which marked the end of the first half of the season, delivered multiple battles, both at the front of the pack and further down the peloton. 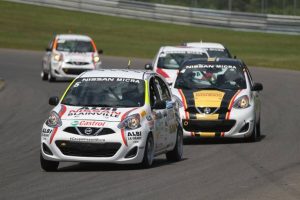 Qualifying in pole position for the first round on Saturday, Thanaroj Thanasitnitike led the first few laps, never quite being able to shake off his chasing teammate Bikkani or Albertan driver Stefan Rzadzinski. Series leader Olivier Bédard, as well as Valérie Limoges, who executed a nice climb up from tenth place on the starting grid, and Valérie Chiasson, who started in fifth but gave up four spots before climbing back, all joined the three favourites at the front of the pack.
On the last turn, each of the six drivers attempted the pass that would give them the victory. But with identical cars for everyone, and with a version that is so similar to a stock car, it’s not enough to just have driving talent; drivers must also be very opportunistic. Bikkani came out on top, on his way to claiming his first-ever series victory. Thanasitnitike finished just three-tenths of a second behind, slightly ahead of Rzadzinski, Bédard, Limoges and Chiasson.

After a great start to the race, Metod Topolnik relinquished three places during the event. He finished seventh overall but was the first novice driver, which consolidated his position as championship leader in the rookie category. Marc-Antoine Demers, Jacques Bélanger and Kevin King completed the “Top 10.”
Taking place on Sunday afternoon, in intense heat, the second race kicked off with similar momentum. Unfortunately, the first lap resulted in a hit that forced Metod Topolnik to abandon the race, soon followed by Valérie Chiasson and Yves Aubé. Grouped at the front of the pack, Bikkani, Thanasitnitikate, Rzadzinski and Bédard crossed the finish line in the same order, separated by just over one second.
Valérie Limoges completed the Top five, just as the night before, ahead of Olivier Pelletier who earned his second novice win of the season. Jacques Bélanger finished seventh ahead of Marc-Antoine Demers, Kevin King and Louis-Philippe Montour, who made his series debut this weekend.
In the drivers’ championship, Thanasitnitikate (216 points) retook the lead ahead of Olivier Bédard (202). Rzadzinski remains in third (180) ahead of Bikkani (155) who took over fourth place from Valérie Chiasson (121). Metod Topolnik still leads the novice championship.
With this outing only just finishing at the Circuit Mont-Tremblant, drivers and organizers of the Nissan Micra Cup will meet once again for two new races next weekend at the Grand Prix de Trois-Rivières.