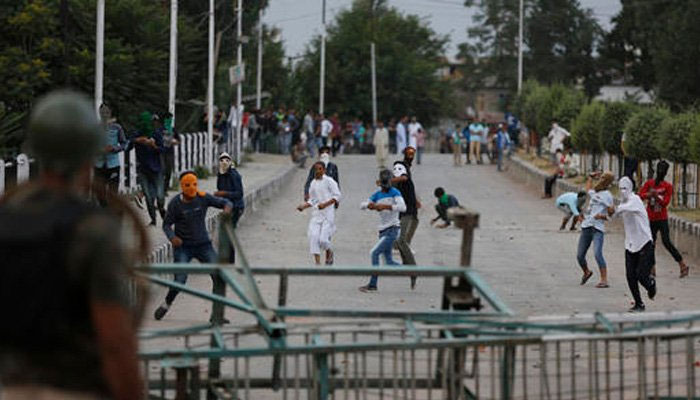 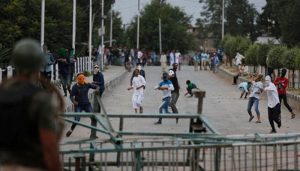 Srinagar: Dozens were injured in fresh protests in the Kashmir Valley on Monday as people defied curfew to march to Anantnag in a more volatile region in response to a call by separatists.

Police sources said people from many places in south Kashmir and parts of old Srinagar city took to the streets despite the strict curfew.

The government had tightened security across the valley to thwart the Anantnag march, fearing an outbreak of violent protests if people came out in large numbers to reach south Kashmir – the worst hit in the days of unrest that has left nearly 50 people dead and thousands injured.

The sources said police and paramilitary forces baton charged and fired pellets to chase away the protesters marching towards Anantnag town square where separatist leaders Syed Ali Shah Geelani and Mirwaiz Umar Farooq had planned to address public rallies and offer prayers in absentia for the dead.

Both Geelani and the Mirwaiz were taken into preventive custody as they defied prohibitory orders.

Geelani, who has been in detention at his residence in the upscale Hyderpora neighbourhood, came out despite a tight security cordon around his house. But policemen outside stopped him and drove him away in a bullet proof armoured vehicle to the nearby Humhama police station, an officer told IANS.

The Mirwaiz was also detained at a police station near his house when he defied restrictions and attempted to march towards Anantnag.

Other separatist leaders including Shabir Shah have also been detained while Yaseen Malik of the Jammu and Kashmir Liberation Front has been lodged in a Srinagar lockup since violent protests erupted across the Kashmir Valley following the July 8 killing of Hizbul Mujahideen commander Burhan Wani.

But police said in a statement that the “situation throughout the Kashmir Valley remained peaceful and under control although some stray stone pelting incidents were reported from some places”.

The separatists have extended their protest shutdown call till July 29.

Reminiscent of the 2008 and 2010 unrest, separatists have issued weekly protest calendars in the valley asking people when to open or shut their shops and come out on the streets for demonstrations.

Meanwhile, another youth injured in the street protests, Sameer Ahmad Wani, succumbed on Sunday, increasing the death toll to 49 in the current unrest.

The summer vacation for schools and colleges in the valley officially ended on Sunday. Education Minister Naeem Akhtar confirmed the end of the vacations.

But most educational institutes in the valley remained closed on Monday due to restrictions and separatist-called shutdown.

In Srinagar, shops and businesses remained closed for the 17th day in a row. Employee attendance in offices was negligible even as the government has ordered everyone to report for work, an official in Srinagar’s civil secretariat said.