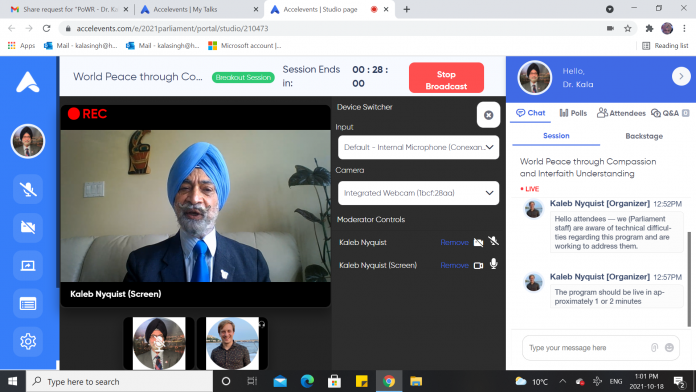 8th Parliament of World Religions (PoWR) this year was held virtually from October 16 to 18. The theme of the conference was “Opening Our Hearts to the World: Compassion in Action”. Thousands of participants from various religions took part. It was a novel experience for me participating in such a conference virtually for the first time. The opening prayers were held from different faiths. Bhai Mandeep Singh represented Bhai Ravi Singh of Khalsa Aid who was in the hospital awaiting kidney transplant. Along with his opening speech he recited the Hukamnama of the day. I participated in a Panel Discussion of 45 minutes which was held on October 16 after opening prayers titled “South Asia Regional Symposium – Coming Together to Alleviate the Suffering of People and the Planet”, moderated by Nitin Ajmera, Chairman of the Board of Trustees PoWR. Participants along with me were Prof. Durga Basu, Former Professor and Head of Department of Archaeology Calcutta University, Sarah Chowdhary Legal Counsel Illinois State Comptroller and Nilakshi Rajkhowa of Bhai Faith. I participated in 2nd Panel Discussion of 45 minutes which was held on October 17 titled “Guru Granth Sahib and Its Universal Message” moderated by Balwant Singh Hansra, Past Trustee of Board of Trustees PoWR. Participants were Bhai Baldeep Singh, Chairman of Anad Foundation and (Retd.) Brigadier General Rawel Singh including myself. My address to PoWR was for 45 minutes on October 18 titled “World Peace Through Compassion and Interfaith Understanding”. I spoke on universality of Guru Granth Sahib which has teachings of 6 Gurus and 30 Hindu and Moslem Saints making it a Holy Book of all faiths. Guru Nanak gave the message of One Creator God with Fatherhood of God and Brotherhood of Mankind. If accepted, no one will hate anyone and there will be world peace. Martyrdom of Guru Tegh Bahadur for freedom of choice of worship as living example of compassion was discussed. Bhai Kanahya resuscitating both Sikh and Moslem soldiers in the war by feeding them with water as concept of modern day Red Cross and another example of compassion was discussed. Concept of Saint-Soldier was also discussed in the address. The closing ceremony was held on October 18. Along with personalities from different faiths Bhai Sahib Bhai Mohinder Singh Ahluwalia of Guru Nanak Nishkam Sevak Jatha Birmingham UK gave his closing remarks.
Dr. Kala Singh is regular contributor to the Link, Physician, Motivational Speaker, TV, YouTube personality and Secretary, Multifaith Summit Council of BC can be contacted at 604 327 5253 for more information.