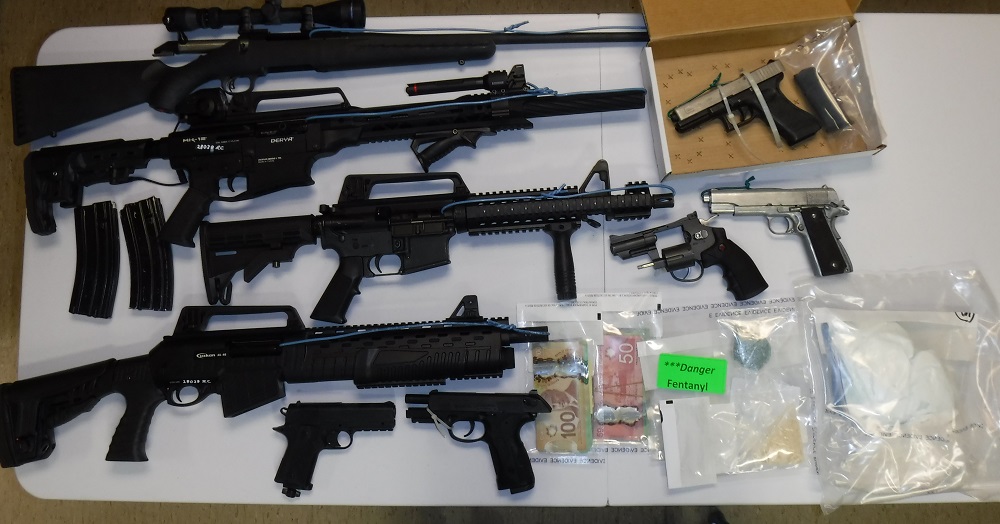 Chilliwack:  RCMP seized drugs, firearms, and stolen property during the execution of search warrants at a local house.

The searches stemmed from calls received by police reporting a high volume of foot and vehicle traffic associated to a house in the 9200-block of Broadway Street.  RCMP Crime Reduction Unit (CRU) investigators covertly gathered evidence leading to the execution of the warrants.

On February 15, CRU officers supported by the Chilliwack RCMP Prolific Offender Suppression Team (POST) executed a Controlled Drug and Substance Act (CDSA) search warrant of the dwelling. Drugs believed to be methamphetamine and drug trafficking paraphernalia were seized by police during their search. Five people in the residence taken into custody were later released by RCMP.

“The execution of the search warrant on February 15 follows a search conducted by the RCMP in January 2018,” says Corporal Mike Rail spokesperson for the UFVRD.

On January 16, 2018 officers from Chilliwack CRU and POST executed a CDSA search warrant at the same address. A significant amount of drugs believed to be opioids, and methamphetamine, firearms, ammunition and property linked to thefts from businesses in Chilliwack were seized by police. Three individuals in the residence were taken into custody on unrelated warrants of arrest.

RCMP investigators will be submitting all circumstances of the investigation in a report to Crown Counsel for their assessment of CDSA and criminal charges.

“Alert residents reporting unusual activity in their neighbourhood to the RCMP was key to our investigations. The RCMP work together with citizens to keep our neighbourhoods safe from drugs and violence,” says Rail.

Tips on how to spot a drug / crime house in the neighbourhood: