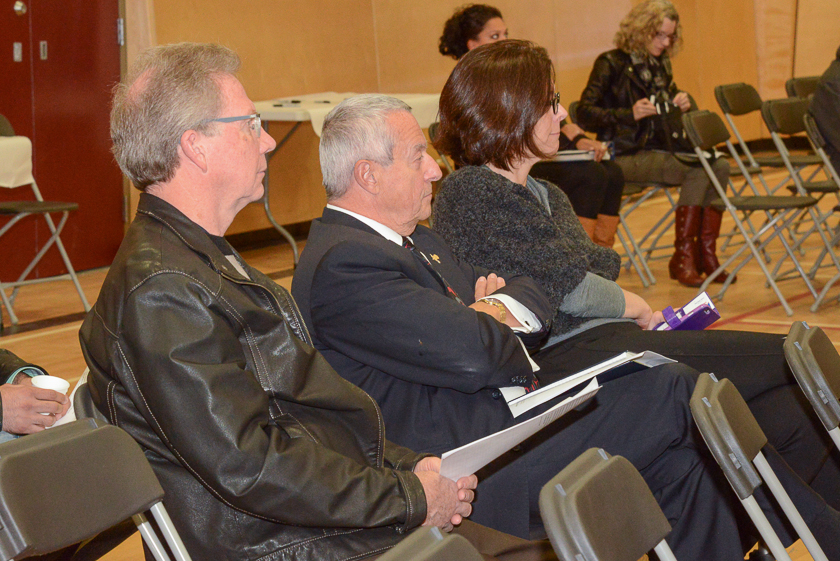 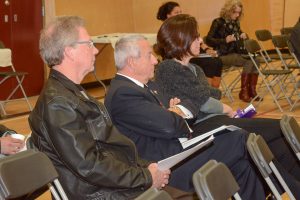 Surrey: Around fifty people, including four MLAs, attended a ‘how to advocate’ for education funding meeting at Ecolé Woodward Hill Elementary school in Newton this past week. Jennifer Dirkson mother of four and member of Advocacy for Education is shown at the microphone.

“Education 101” was for people interested in learning how to effectively lobby government, particularly for increased resources for Surrey’s schools.

The seminar idea followed efforts of parents, earlier in the year, to deal with student crowding, and threatened program changes, at Ecolé Woodward Hill Elementary school in Newton. Residential development in the catchment area didn’t require proportionate the development of school facilities to keep pace with population increases from that construction.

The “South Newton Community” group has grown and now operates under the banner “Advocacy for Education” and has expanded their goals to include seeking a better funding formula than the one based on a dollar amount per student. They want relief for School Districts which must pay all related costs for Portable Classrooms, including the $100 thousand purchase price from operating budgets portables (Surrey houses 7,000 students in 273 portables), and ultimately their elimination altogether. Surrey schools are overcrowded and the explosive population growth continues.

To background the event, Alex Hemmingway, Public Finance Policy Analyst for the BC office of the Canadian Centre for Policy Alternatives was to review the current funding issues, but was sidelined with the flu. His video presentation was shown instead. Some of the highlights included:

How to Advocate: The thrust of the evening was to provide the means by which people could most effectively advocate for solutions around these and other issues, to the provincial or municipal governments, school boards and other agencies.

The audience heard how to write letters and to whom and what form they should take. They heard how and why to participate in the Neighbourhood Concept Planning processes and how to effectively participate in public dialogue.

Cindy Dalglish, who learned how to speak to Surrey Council over the development versus school facility and program issues, said that petitions don’t work, while well written letters to the councilor or MLA are much more effective. She stressed that people don’t have to make major time commitments to be effective. It may be as simple as writing a letter or email. She reminded people that parents ultimately hold the power, and that they need to know and stay in touch with their elected representatives because sooner or later there will be an election.

After the event, Dalglish said they were hoping for more people but recognized is was right after a long weekend, at dinner time and on a weeknight against lots of competing activities.

“I think our message was received and reaffirmed in audience comments,” said Dalglish. “There were a lot of examples of how chronic underfunding affects our communities. It’s not just about portables. We had MLAs Peter Fassbender, Stephanie Cadieux, Marvin Hunt and Harry Bains in the audience as well as former MLA Jagrup Brar and former MP Jinny Simms, so I’m pretty happy that they attended.”

Will they do it again?

“We’ll look at the feedback from this event, tweak the program a bit more and roll it out in a different part of Surrey in a couple of months,” she said. “We want to get other neighbourhoods participating as well.”

Newton MLA Harry Bains commented that it was apparent people were frustrated with the issue not being fully addressed.

“Education is the greatest equalizer,” said Bains. “Our western society learned that hundreds of years ago, that our children who are our future. If we don’t build a strong base from K to 12 and give them the proper skill and education, how are they going to compete with the rest of the world?

Cloverdale MLA, Stephanie Cadieux said, “These are issues we (MLAs) have been dealing with for a number of years now. The pace of growth has been strong for a long time and it’s very difficult to meet the demand. We’ve invested about $430 million in Surrey in the last ten years with more to come hopefully. I understand the frustrations of parents and educators. I live here too.”

More information can be found at http://www.southnewtoncommunity.com