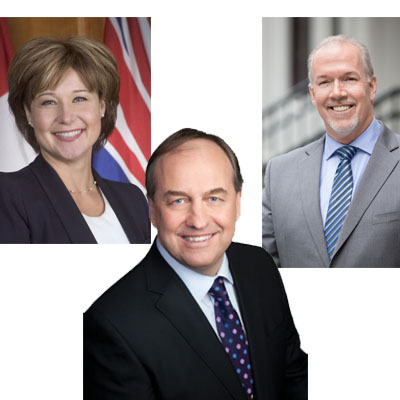 Greens could wag the dog

The polls said it would be close, but after Clark’s Liberals and Horgan’s NDP swapped the lead a number of times on election night, it ended with the Liberals one seat short of the 44 seat majority at 43 seats and the NDP three seats short of the prize at 41. The winner in the contest appears to be the Green Party led by Andrew Weaver and his two colleagues who were successful in winning three seats and dramatically increasing their popular vote.

If nothing changes after the counting is all done it will be the Greens holding the balance of power in any minority government, the first in BC in sixty years. The question is, with whom?

Undoubtedly the wooing of Weaver has begun, and the Lt. Governor has, as custom dictates, invited Christy Clark to form a government, and govern, as long as it can maintain the confidence of the house.

At the moment, attention is focused on the outcome of the impact of the absentee ballots, particularly in that nine vote margin in Courtney-Comox that stands between a Liberal minority or majority government.

Absentee ballots: There are176,104 of them which won’t be tallied until May 24.  Here’s why: when you vote outside your riding (eligible voters can vote at any voting place in the province) the ballot has to be returned to your electoral district and counted in that contest. That takes time.  Absentee votes seldom change results, but a nine vote margin may be another matter.

Courtney-Comox: When the counting was done on Tuesday evening NDP candidate, Ronna-Rae Leonard, was just nine votes ahead of B.C. Liberal Jim Benninger. In this case absentee ballots could make a difference. Some estimates put the number as high as 1500, as members of the armed forces, stationed at CFB Comox, may not have been able to vote on May 9. The fact that the Liberal Candidate, Benninger, is a retired base commander of CFB Comox may be a factor in the importance of this count.

In ridings where the result was very close a judicial recount could be either automatic or sought. A judicial recount is automatic if the difference between the top two candidates is less than 1/500 or .2% of the total ballots considered.

Judicial Recounts: Absentee ballots could also reduce the tight margin of victory in several other ridings, allowing second-place candidates to request a judicial recount. The parties can request an additional review starting May 31, but it must be approved by the Supreme Court.

It could be the second week of June before a final result is determined.

Only three judicial recounts have been conducted in B.C., and none has overturned the original election results. Still, with so much at stake, it wouldn’t be surprising for the parties to pursue these recounts given the closeness of the overall race.

At the End of the Day:  Reports put the voter turnout at around 60%, which sustained the NDP vote and boosted the vote for the Green Party.  The Liberals lost most of the swing ridings with some significant losses; Suzanne Anton, Attorney General, who won her riding by a hair last time; Translink and Sport & Culture Minister, Peter Fassbender who defeated Jagrup Brar last time, lost to Brar this time; Amrik Virk Technology & Innovation Minister lost to former cop colleague Gary Beck, Naomi Yamamoto, Minister of State for Emergency Preparedness, lost after two terms; and Delta North’s Scott Hamilton saw his riding return to the NDP fold.

Generally speaking, the interior of BC belongs to the Liberals, the NDP own the coast, Lower Mainland and Vancouver Island, but the real winners are the Greens.