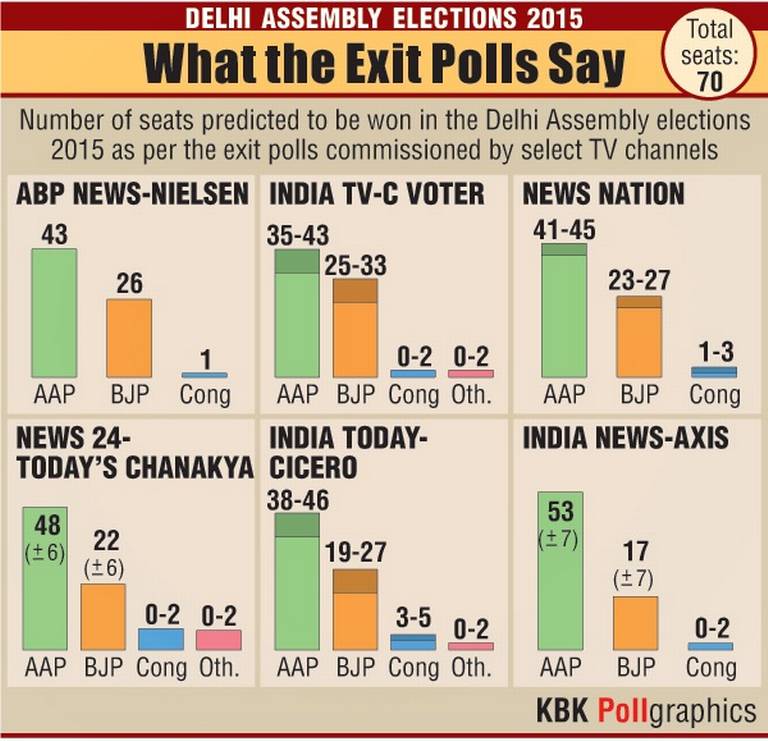 New Delhi, Feb 7 (IANS) A year after its 49-day stint in power ended abruptly, Arvind Kejriwal’s AAP was set to return to power in Delhi, exit polls said Saturday after record voting in assembly elections whose outcome is bound to have national ramifications.

Half-a-dozen exit polls said the AAP, born in 2012 on the strength of an anti-corruption movement, was likely to get between 31 and a staggering 54 seats in the 70-member assembly, relegating the BJP to the second spot and virtually wiping out the Congress, India’s oldest political party. 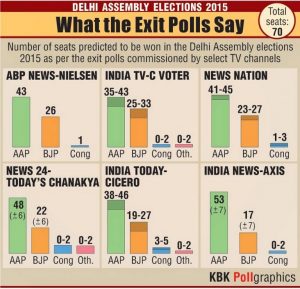 The Bharatiya Janata Party could bag 17-35 seats. The Congress, which ruled Delhi for 15 years until December 2013, would be routed, winning no seat or at best four seats, the exit polls predicted.

A happy Kejriwal, who ran an aggressive campaign over the months drawing huge crowds, expressed gratitude to the people of Delhi for voting for the Aam Aadmi Party in large numbers.

“(You are) so amazing,” he tweeted. “(You) rejected politics of caste and religion. Hope final results (are) as per exit polls.”

Putting up a brave face, BJP’s chief ministerial candidate Kiran Bedi disputed the exit poll findings and said she was confident her party would win. “Wait till Feb 10,” she said, referring to the day the votes will be counted.

Senior AAP leader Yogendra Yadav said his party was headed for a landslide and could get more than 50 seats.

There was no comment from BJP president Amit Shah, who along with Prime Minister Narendra Modi had picked Bedi, India’s first woman Indian Police Service officer and a former Kejriwal colleague, to head the BJP charge in Delhi, shocking the party’s established leadership in the capital.

A record 67 percent of Delhi’s 13.3 million electorate voted Saturday, with maximum polling recorded in low-income areas all over the city where the AAP enjoyed maximum appeal.

Today’s Chanakya gave 48 seats to the AAP and 22 to the BJP. The BJP tally, if correct, would be less than the 28 the AAP had got in its maiden election 14 months ago. It said the Congress would be crushed.

A party will need at least 36 seats to form the government in Delhi.

The Axis-APM poll credited a stunning 53 seats to the AAP and 17 to the BJP.

Today’s Chanakya also said that 53 percent of voters felt that Kejriwal, an income tax officer-turned-activist-turned-politician, was best suited to be Delhi’s chief minister. Bedi got only 36 percent approval.

It also said that all social classes in Delhi — Dalits, Muslims, Banias, Brahmins, OBCs and Punjabis — voted more for the AAP. The Muslim vote for the AAP was as high as 71 percent.

Although the Delhi election was a battle for the city state, it became high profile after Prime Minister Modi addressed rallies asking people to reject the AAP and its leader Kejriwal whom he called a Maoist.

Huge billboards all across the capital as well as the BJP’s advertisement blitz urged voters to support Modi.

Former Jammu and Kashmir chief minister Omar Abdullah was the first among senior politicians to mock at Modi after the exit polls.

“If your slogan is ‘Chalo chalen Modi ke saath’ (Let us go with Modi) as we heard ad nauseam on the radio, you can’t claim the result isn’t about HIM,” Abdullah tweeted.

When Kejriwal went to his polling centre, he was virtually mobbed by voters. Midway through the balloting that ended at 6 p.m., the AAP and the BJP claimed they were poised to win.

Although the Congress was also in the race, it was squeezed out in the BJP-AAP battle.

Congress president Sonia Gandhi was mellowed when asked about her party’s prospects. “Jo janta chahegi wahi hoga (What people want will happen)”, she said after casting her vote.

The elections took place a year after Kejriwal resigned after being the chief minister for 49 tumultuous days.