It will boggle your mind

Although the word pilgrimage brings up thoughts of religion, the annual pilgrimage to Burns Bog is an afternoon tour to celebrate the spirit of nature and understanding what the bog does for our well-being. Although it is spiritual in nature, it is not religious. For some people escaping the confines of our high-tech lifestyle for a few hours, to experience, maybe even for the first time, the nature around us, can be a spiritual experience. For others, it is a chance to unplug and find out what the natural world is all about.

This Sunday, the annual pilgrimage is about an organized formal visit to the bog lead by Dr. Eliza Olson and other members of the Burns Bog Society. For those taking the free tour, the bog will cease to be just a swamp, but a living breathing entity that is critical to the health of everyone and everything living in the lower mainland.

Olson, the President of the Burns Bog Society explained that bogs have had an historic connection with the spiritual and mythological, particularly among the ancient Celts and Norse peoples.

“In 1988 a group of people, including Sister Cecilia from the Sisters of Mercy in Richmond and Karl Perrin from the Unitarian Church in Vancouver, created a pilgrimage to raise awareness about the bog. The group walked from Deas Island Park to the Vancouver Landfill where they entered the bog. After a couple of years it dropped away, but now it’s a much shorter walk starting at the gate of the Delta Nature Reserve.”

There are more details about the pilgrimage at the end of the article.

Burns Bog is the largest raised bog on the west coast of North America, it’s about twenty feet higher in the middle than along the edges. It’s unique because raised bogs are more common in northern climates in Ireland, Finland, Northern Russia and Northern Canada.
• It’s 8 times larger than Stanley Park 3,000 hectares (8,000 acres)
• There are 24 species of mammal and 150 bird species,
Olson said that concern over the protection of the bog has lead to the implementation of a 100 year public access prohibition to the main bog. The Delta Nature Reserve, situated on the bog’s edge, east of Highway 91.

“I know the mayor supports this prohibition on access for 100 years, but I don’t,” said Olson. I support controlled access. The people have paid for it and should have a right to see what they’ve paid for.” 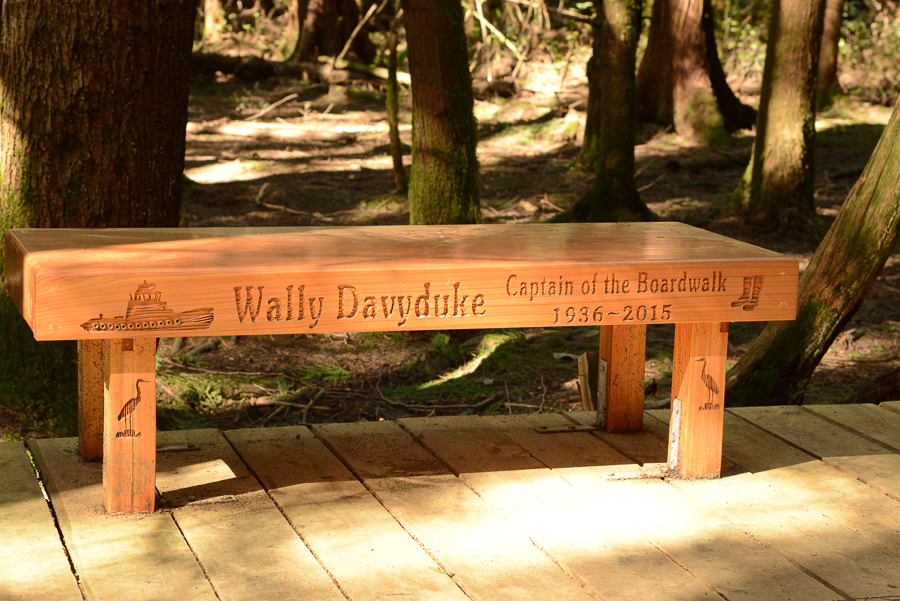 “Since I started this journey 28 years ago,” said Olson, “I’ve learned much about bogs.”
• Burns Bog is an estuarine bog, situated in the intertidal zone of the Fraser River estuary.
• Our Honourary Chair, David Bellamy dates its origins back ten to twelve thousand years to the ice age, Canadian experts, on the other hand, date it’s age at to five to six thousand years. Bellamy says the only other place he knows of such bogs is in Amchatka, Russia.
• Burns Bog is the largest urban green space around any large urban area, and occupies about one-third of the municipality of Delta.
“One of the things many people don’t realize is that the bog is an enormous carbon sink trapping much more carbon than forest over the same area,” Olson said. “Every time you stick a shovel into the bog you release methane and other green house gases so the bog is better left undisturbed. I don’t know when the governments are going to figure it out. They should be giving those companies and individuals who own bog land, some sort of incentive to keep it as bog. Everyone is talking about carbon credits and such, when the UN reports point out that the cheapest way to reduce greenhouse gases is not to interfere with the bogs.”
Since the settlement of the west coast, the bog has been seen as something that needed to be drained and developed. Olson said that it has had several close calls.

“About 1860 three surveyors were allowed to purchase the bog on the condition that they do just that, drain it and develop it,” she said. “That was the attitude in those days because you couldn’t do anything else with it. Then Dominic Burns, the brother of meat packer magnate Pat Burns, tried to raise cattle on it. That didn’t work either, they got bogged-down. But along the edges of the bog, they found some of the best farmland and because of its value to agriculture, began developing around the bog’s edges. This resulted in the shrinkage of the bog to what it is today.  It actually reaches just south of River Road, almost to Boundary Bay.”
It didn’t entirely escape development as the bog was mined for peat moss for the US Military in the 1940s to refine magnesium for artillery shells. This left large holes and drainage ditches in the middle of the bog. Large scale peat harvesting stopped in the 1980s but resource extraction remained to be the official land use zoning of the majority of the bog until 2004. When Peat operations ceased, the Society tried to acquire and recondition the buildings left on the property near 72nd Ave, to use as a headquarters and park centre. Unfortunately, the buildings were demolished. The Bog Society, however, has not given up the dream of developing appropriate facilities at the Nature Reserve.

“There might be a better spot, who knows,” said Olson. “Somebody might donate dome land next to the bog.”

Burns Bog as a place to visit

The Delta Nature Reserve, open all the time, has been made quite accessible due to a series of boardwalk trails, many designed and built by Eliza Olson’s late husband, Wally Daveyduke, the co-founder of the Burns Bog Society and the Foundation.
“Planet Ice, near the south end of the Alex Fraser Bridge has been very generous in allowing people to park at the back of their lot,’ says Olson. “Follow the interlocking brick road leading under Nordel Way and you’ll see a sign and maps for the Delta Nature Reserve. A short walk along the road going south will bring you to the boardwalks. There are four entry points so check the map. We ask you to please leash your dogs and pick up the poop. It’s not good for the visitors and, if there’s enough of it, it’s not good for the bog either. Bogs are nutrient poor, but dog feces makes the environment more nutrient-rich which is not good.”
Olson described an important relationship between the bog and the salmon of the Fraser River.

“On Sunday April 24th Metis Eileen LaFlamme and her group, the Daughters of the Drum, open the ceremony,” said Olson. “Singers of the Sacred Web are coming back this year. Also we have a woman who does interpretive dance around bogs.”
Anyone interested in this memorable experience should gather at the entrance to the Delta Nature Reserve starting at 1 pm. At 1:30 pm following a brief greeting, the group will walk along Cougar Creek to the boardwalk to the sunken tractor. Following that will be a commemoration of a memorial bench for Wally Daveyduke, who died in February of 2015. Coffee will be provided by De Dutch Pannekoek, and scones by Cobbs Bakery.

For more information go to www.burnsbog.org, then enjoy a day of exploration at the largest bog on the west coast of the continent.