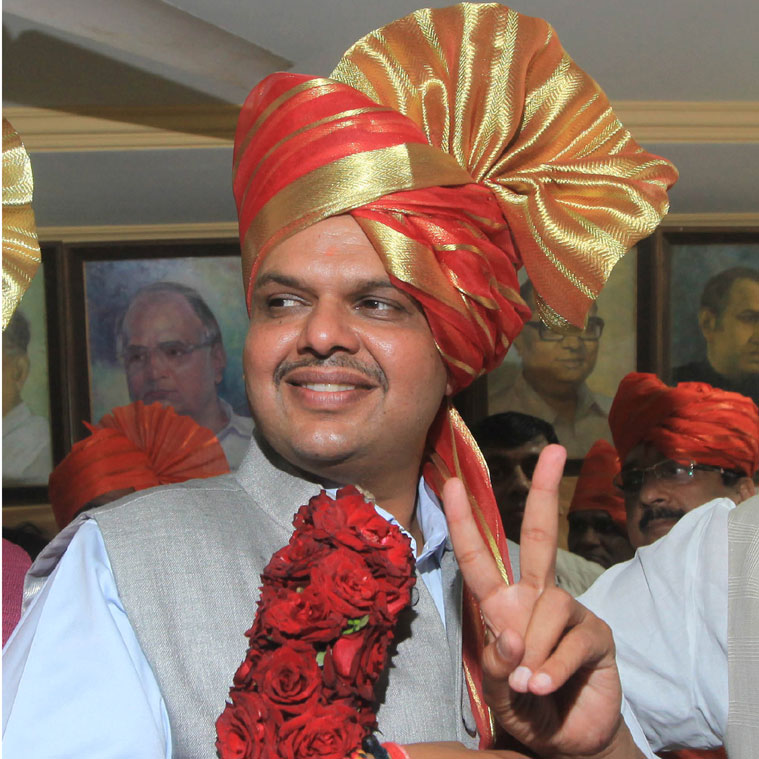 Mumbai: Devendra Fadnavis was sworn in as chief minister of Maharashtra’s first BJP government along with nine ministers, cheered by some 30,000 supporters at the Wankhede stadium and watched by Prime Minister Narendra Modi, VIPs and celebrities.

Governor C.V. Rao administered the oath of office and secrecy to Fadnavis, 44, and the ministers, including two women, at a glittering ceremony, 12 days after Maharashtra threw up a hung assembly with the Bharatiya Janata Party (BJP) finishing on top.

The minority government has to prove its legislative majority within 15 days.

Dilip Kamble and Vidya Thakur, the first former woman deputy mayor of Mumbai, were sworn in as ministers of state.

The Shiv Sena, which sulked till the last minute and threatened to boycott the ceremony, turned around at the last minute after a phone call from BJP president Amit Shah. Eventually, Sena chief Uddhav Thackery came to the venue but looked sullen.

But it is not yet clear if the Sena will join the government.

After taking oath, the minority government got down to business. The ‘Mr Clean’ moved into his office and presided over the first cabinet meeting at Mantralaya, the government headquarters.

Besides Modi and Shah, BJP chief ministers from other states, business tycoons, Bollywood personalities, sportspersons and celebrities were among those who witnessed the ceremony.

The BJP’s road to emergence as the single largest party came after it ended its 25-year-long alliance with the Shiv Sena, followed by 10 days of uncertainty over government formation till Fadnavis was unanimously elected the BJP Legislature Party leader two days ago.

This is only the second non-Congress government in Maharashtra. A Shiv Sena-BJP coalition was in power in 1995-99.

Hailing from Nagpur where he created history in 1997 by becoming the state’s youngest mayor at 27, Fadnavis is the 18th chief minister and the second Brahmin and the fourth from Vidarbha region to hold the post.

Handpicked by Modi and Shah over several other contenders, the lawyer-turned-politician was cheered loudly by the army of BJP activists that had packed the stadium.

The BJP won 122 of the 288 seats. But one legislator died later, reducing its strength to 121. The Rashtriya Samaj Paksha’s sole member is with the BJP.

While the Shiv Sena with 63 legislators is undecided on joining the government, the Nationalist Congress Party (NCP) with 41 legislators has announced it will abstain from the confidence vote, ensuring Fadnavis a smooth sailing during the floor test.

Fadnavis’ cabinet includes a blend of senior experienced leaders along with youth leaders.

Nearly half of them were strong contenders for the post of chief minister. But Modi’s and Shah’s will prevailed — and Fadnavis got the top job in one of India’s biggest and most important states.