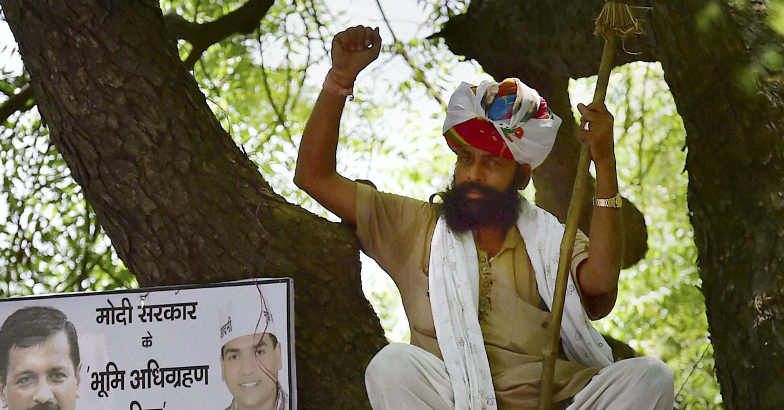 New Delhi, April 22 (IANS) A farmer from Rajasthan, his crops ruined by rains, hanged himself from a tree at an AAP rally here on Wednesday just before Delhi Chief Minister Arvind Kejriwal addressed thousands against the controversial land ordinance.
The dramatic death of Gajendra Singh, a father of three, immediately turned into a political drama, with the Aam Aadmi Party blaming Delhi Police and the BJP and the Congress attacking Kejriwal and the AAP.
Shortly after doctors at the Ram Manohar Lohia Hospital declared the man dead, Home Minister Rajnath Singh told Delhi Police, which reports to him, to hold an inquiry into the death.
The sensational incident took place at Jantar Mantar in the heart of the city where thousands from Delhi and other states had turned up to denounce the land bill at a mass meeting called by the AAP.
Three AAP activists who saw the man hanging climbed the tree and tried to bring him down. But as they untied the scarf the farmer had tied to a tree branch to hang himself, his body fell with a loud thud.
As chaos gripped the venue, an IANS reporter at the site saw that the man was barely breathing. His tongue was protruding.
One of the AAP activists who had climbed the tree fainted on the branch. Others then clambered up and brought him down after sprinkling water on his face.
A suicide note in Hindi found at the spot said the man was taking his life because untimely rains had destroyed his crops and ruined him. He ended the note with “Jai Jawan, Jai Kisan, Jai Rajasthan”.
As emotionally charged AAP activists raised anti-police slogans, the man was rushed to the Ram Manohar Lohia Hospital where he was declared dead.
Kejriwal was told of the incident — it wasn’t clear then whether the man was alive or dead — by some volunteers on the dias. Thinking that the man was probably alive, the chief minister said he would call on him affer the rally.
After a hard-hitting speech in which he accused the Narendra Modi government of trying to snatch farmers’ land to give it to the “super rich”, Kejriwal and Deputy Chief Minister Manish Sisodia drove to the hospital.
By then, Delhi Congress leader Ajay Maken had visited the hospital and remarked that both the AAP and police should have taken steps to avoid the suicide.
At his party office, BJP spokesman Sambit Patra asked: “Why didn’t the AAP leaders stop the farmer from committing suicide?”
Congress vice president Rahul Gandhi also visited the hospital. He later told the media: “We are with the farmer’s family. We will help them.”
Earlier, Kejriwal vowed to organise farmers all over the country on the issue.
Modi had betrayed the trust of the farmers after taking their vote and forming a government, Kejriwal told the protesters.
When the farming community voted for Modi in the Lok Sabha election, they were confident that he would be able to end suicides by farmers.
“But today farmers have realized that this is not a government of farmers, it is a government of anti-farmers,” he said to loud cheers.
“This is ‘super amiron ki sarkar (a government of the super rich).”
Kejriwal questioned the need to enact an ordinance to make land takeover easy.
“What is the urgency? Is there a big emergency? What is the compulsion? Is some major project stalled? Our farmers want to know.”
The chief minister said farmers all over the country were protesting against the land bill.
He declared that he would not allow land to be taken away from farmers in Delhi without their consent.
Farmers would stop killing themselves in the country only when farming was made profitable, the chief minister said. He said he would write to all the chief ministers on the issue.