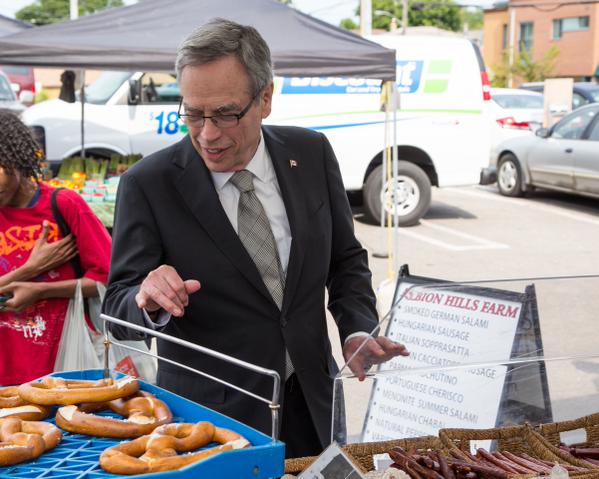 By Geordon Omand, The Canadian Press
Vancouver: Finance Minister Joe Oliver is tempering his optimistic outlook on the country’s economy, saying it’s too early to tell whether Canada has slumped into a recession.
“The numbers aren’t out yet,” Joe Oliver said Tuesday in Vancouver. “When the numbers are out we’ll see what they have to say.”
Concerns that Canada has fallen into a recession have grown since Statistics Canada figures released last week showed that the economy contracted in April, marking the fourth straight monthly decline. The next round of monthly GDP figures come out July 31.
Oliver’s comments Tuesday marked a shift in his position. Last Friday, on the heels of the Bank of America Merrill Lynch suggesting Canada was in a recession, Oliver rejected the possibility.
But on Monday, TD Bank added its voice to the growing chorus of economists warning that the country was likely in a recession through the first half of the year, largely because of the continuing fallout of low oil prices.
“Canadian forecasters have consistently underestimated the impact of the sharp decline in oil prices on the Canadian economy,” wrote TD senior economist Randall Bartlett.
That, coupled with Statistics Canada saying Tuesday the country’s trade deficit grew to $3.34 billion in May _ worse than the $2.5 billion deficit economists had expected _ have painted an economic picture that gets increasingly bleak.
But despite the sluggish economic performance, Oliver said he remains confident that Canada would end the fiscal year with a $1.4 billion surplus as promised in the Conservative budget.
Oliver said it’s important to remember that as an export-oriented economy, Canada is in a fragile economic environment, citing Europe’s economic woes in addition to the dramatic decline in the price of oil.
More than half of Canada’s nearly $2-trillion economy consists of trade, making it highly susceptible to external factors, he said.
“Trade is absolutely at the core of our prosperity and our growth,” said Oliver.
Oliver said a dismal American economic performance at the beginning of this year also undermined confidence for Canadian companies, but he added that more recent growth in the U.S. would spill across the border and stimulate Canada’s economy.
“The fact that (the American economy) was down in the first quarter obviously undermines confidence in Canadian manufacturers and other companies to make that kind of investment,” he said. “But if they see the U.S. economy growing, I think they’ll see that as a positive sign to start investing once more.”
Speaking to a crowd of business leaders at the Australia-Canada Economic Leadership Forum earlier in the day, Oliver said Canada must stay the economic course so as not to follow Greece.
He said he has faith that Europe will be able to sort itself out over the debt crisis.
Oliver also took an opportunity during his speech to criticize the Liberals and NDP for what he described as their willingness to bring in higher taxes and increased public spending.
“If we had listened to the opposition parties … during the economic crisis, the amount of deficits and debt that we would have incurred would have been a lot greater and we would still be in deficit today,” he said.
Federal Liberal Leader Justin Trudeau dismissed Oliver’s comments, saying the Tories have a history of running deficits while his party would balance the books.
“Liberals know how to run surpluses,” Trudeau said in Montreal, where he was attending the Assembly of First Nations annual meeting.
The federal election is set for October.
© 2015 The Canadian Press