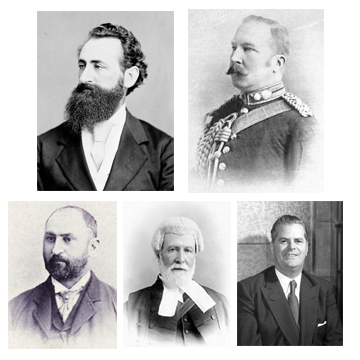 It is said that in order to understand where you are and where you’re going you have to know where you’ve been. One weak spot, given the

Provincial Election call this week is that not many of us know who our Premiers have been. There have been some very interesting people.

First: John Foster McCreight QC, the first Premier of B.C. from 1871 to 1872. He remained in the legislature until 1875, returning to his law practice for five years. He was made a justice of the Supreme Court of British Columbia serving in the Cariboo, Victoria, then New Westminster in 1883, retiring in 1897. McCreight returned to England, at the age of 70, dying at the age of 86.

Flamboyant: Amor De Cosmos, second Premier from 1872 to February 1874 in BC’s first parliament. Born William Alexander Smith in Windsor, Nova Scotia. Educated at King’s College, he became a mercantile clerk in Halifax. Joined the Mormons, and in 1853 he followed the lure of the California Gold Rush to Placerville, California. In 1854, changed his name to “Amor De Cosmos” which means Lover of the Universe. On the serious side, he promoted Canadian confederation as a member of the assembly of the merged, larger British Columbia legislature, earning him the name British Columbia’s Father of Confederation. In 1882, De Cosmos lost the federal election and retired to Victoria. Although widely regarded as a stirring orator, effective debater, and a great intellectual, he was considered eccentric given to emotional outbursts which intensified as he grew older. Declared insane by 1895, he died in Victoria at the age of 71.

Shortest serving: Joseph Martin, 13th Premier of BC served from February 28 to June 14, 1900. While he was a member of the previous government for two years, “Fighting Joe”, introduced such controversial measures such as; an eight-hour work day (opposed by mine owners), and an Alien Exclusion Act to prevent Chinese from owning mining claims. During a controversial public meeting about the issue, Martin breached cabinet solidarity and criticized his own government. He was fired. On February 27, 1900, Lt. Gov. McInnes dismissed Premier Semlin and asked Martin to form a government. Immediately afterward he lost a vote of non-confidence 28-1 upon being appointed, but formed a cabinet and governed for another three months anyway. In 1907, he founded the Vancouver Guardian newspaper. After his return from England, he ran in the 1920 election in Vancouver as an Independent under the banner of the Asiatic Exclusion League. He was defeated and lost his deposit. He died in Vancouver in 1923.

Fired by Lt. Gov: Edward Gawler Prior, 15th Premier, Nov 21, 1902 to June 1, 1903 was an English mining engineer moving to Nanaimo to work as assistant manager of the Vancouver Coal Mining & Land Co., Ltd. In 1878 he resigned and was appointed Inspector of Mines for the British Columbia government. He was first elected provincially, in 1886, and in 1888, won a seat in the Canadian House of Commons as a Conservative. Having lost his seat in 1901 due to violations of election rules, he was elected to the B.C. Legislative Assembly Columbia in 1901, becoming Minister of Mines. In 1902 he became the 15th premier, but was dismissed by the Lt. Governor, in 1903, due to conflict of interest charges that he’d given an important construction contract to his own hardware business. Defeated in the 1904 provincial election, he was appointed the 11th Lt. Governor of British Columbia in 1919 but died in office within a year of his appointment. Edward Gawler Prior is the last Canadian premier to be dismissed by a lieutenant-governor

Longest Serving: William Andrew Cecil (Wacky or Cece) Bennett. The 25th Premier served 20 years in office and remains the longest-serving premier in British Columbia history. He moved to Kelowna from Victoria in 1930 and opened Bennett’s Hardware store. A successful merchant, he served as President of the Kelowna Board of Trade from 1937 to 1939.

Commencing with the 1952 provincial election, the province used an alternative voting system that had been designed to enable the Conservative and Liberal parties to keep the Co-operative Commonwealth Federation (CCF) out of power. They failed to consider what CCF voters would do with their second preferences, which went overwhelmingly to Social Credit (Socreds), 19 seats out of a total of 48. Not even the Socreds expected to win. Bennett, one of only three who had any previous experience in the legislature, was elected party leader and premier-designate on July 15, 1952.

Bennett’s government undertook a series of nationalizations to create provincial Crown corporations: BC Ferries (1960); BC Hydro (1961); BC Rail, formerly the Pacific Great Eastern Railway. Major hydro-electric dam-building projects were undertaken on the Peace and Columbia Rivers; the signing of the Columbia River Treaty with the US in 1961, for both flood control and power generation; the Bank of British Columbia; Universal medical, dental, hospital, and pharmaceutical insurance coverage advocated in 1955. Universal, publicly funded medical and hospital insurance was introduced as part of Medicare, funded by a new retail sales tax; Also his Minister of Highways, (Flying) Phil Gaglardi, oversaw major highway expansions and improvements.

Following his party’s defeat in the October 1972 Bennett served as Leader of the Opposition until resigning his seat in June 1973. He died in 1979.

Today’s BC Liberals will add 340 new stem seats to SFU, BCIT and KPU

World Sikh Oraganization selects new board and president for 2020-21