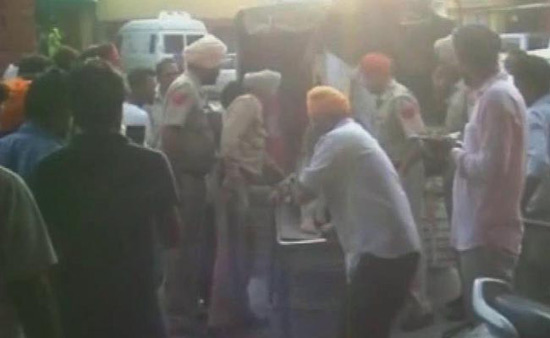 Dinanagar (Punjab), July 27 (IANS) In a suspected terror attack in Punjab early on Monday, terrorists wearing army uniforms fired indiscriminately in Dinanagar town. At least five people, including two police personnel, were killed when terrorists struck at Punjab’s Dinanagar town on Monday, authorities said.
The town is in Punjab’s frontier district of Gurdaspur, close to the India-Pakistan border and near the border with Jammu and Kashmir state.
The attack took place just a day after Chief Minister Prakash Singh Badal faced pro-Khalistan slogans while attending a function at Punjab University in Patiala.
The terrorists, said to be heavily armed, could have taken some people, including police officials, hostage, police officials at the spot told IANS.
A gun battle was on between the terrorists, holed up inside the Dinanagar police station, and security forces, including army troopers. Continuous sound of firing and lobbying of grenades could be heard even three hours after the first shots were fired by the militants.
The police station, adjoining government hospital, residential quarters inside the police station and nearby private houses were cordoned off by security forces.
Gurdaspur Deputy Commissioner Abhinav Trikha said: “The encounter is on. We will be able to tell more only after it ends.”
The terrorists, numbering 3-4 and believed to have come from Pakistan border side, arrived in a Maruti 800 car which they had hijacked after killing a dhaba owner near here. They fired at people near the Dinanagar bus stand and then attacked the Dinanagar police station, located about 100 metres away.
Eyewitnesses said the terrorists fired on a bus going towards Jammu and later entered the police station.
“We were hit by a burst of gunfire suddenly. I was hit on the shoulder. They are firing indiscriminately every five minutes,” a Punjab police official, who was injured in the attack, told media as he was being taken to the hospital.
The town is about 15 km from the India-Pakistan border and 25 km from the border of Jammu and Kashmir state. It is about 235 km from Chandigarh.
Army and police reinforcements were rushed to the spot and a fierce gunbattle with the terrorists was on at the police station.
Police sources said three to four terrorists in army uniforms and carrying automatic weapons were hiding inside the police station. They hijacked a car from a nearby highway and came to the Dinanagar bus stand around 5.30 a.m.
Punjab Police sources said the incident indicated that it was a suicide attack.
In a related development, five live bombs were found on the Amritsar-Pathankot railway track.
The bombs were found by passersby on a bridge near Parmanand railway station on the Amritsar-Pathankot railway section, who informed security forces. Trains on the route were stopped immediately.
A major railway tragedy was averted as the bombs were carefully wired to the railway track at a small bridge near Parmanand railway station, five km from Dinanagar.
A train, which was to pass on the railway track was stopped just 200 metres from the spot where the bombs had been planted.
“Information on the incident is awaited as all police officers are on the spot. Such incidents will be dealt strictly and peace in Punjab will not be allowed to be disturbed,” Punjab Cabinet Minister Daljeet Singh Cheema said.
“So far reports of five deaths including three civilians and two police personnel confirmed from Gurudaspur. Operation is still on,” tweeted Press Information Bureau in Delhi.
Terrorists carried out the attack in Punjab, firing indiscriminately and then storm a police station.