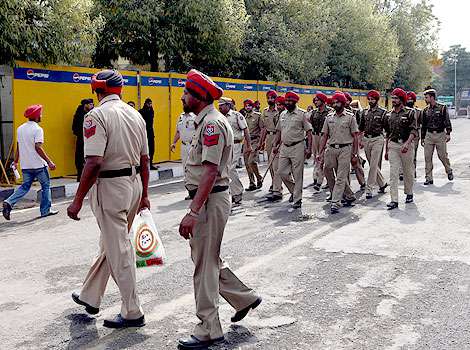 Chandigarh, May 11 (IANS) The Punjab Police on Monday suspended four police officials after they allegedly assaulted a government public relations officer who was on duty during a government-organized religious tour.

The PR officer was covering the “Dharmik Darshan Yatra” organised by the state government and the Shiromani Gurdwara Parbandhak Committee (SGPC) in which relics of three Sikh gurus are being taken through various parts of Punjab for devotees to have a closer look.

The Punjab government’s PR officers condemned the “brutal attack” on the APRO and demanded that the police officials be dismissed from service for the unprovoked attack on a government officer on duty.

“The APRO was officially deputed by the department to ensure the coverage of yatra in Bathinda but the manner in which the police officers dragged him out of his official vehicle and manhandled him clearly reflected the insensitivity of police towards the other departments on duty,” PR department officers said in a statement here on Monday.

The alleged assailants included an inspector, an assistant sub-inspector (ASI) and two constables.

“The manhandling of the PR officer was totally unwarranted and unjustified and the perpetrators of this heinous crime must be given exemplary punishment,” the officers said, adding that PR department officials go to the field almost on daily basis and such incidents were not called for.