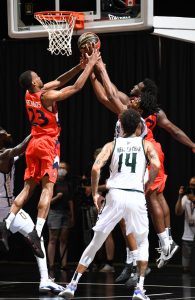 Bandits started out slow down. The Rattlers dominated the opening quarter, outscoring the host Bandits 25-16 with a flurry of three-point buckets, but they could not sustain that momentum on offence while committing far too many turnovers in the game.
A Strong outing by the newest Bandit, former Rattler from the 2019 CEBL championship squad, Alex Campbell, dazzled in his debut for the Fraser Valley Bandits had a game-high 25 points. Alongside another former Rattler in Shaquille Keith, the two led the charge erasing a nine-point deficit in the second quarter. The Bandits bench outscored the Rattlers 43-16 and Campbell capped it off with a buzzer-beater corner three-pointer that gave Fraser Valley a five-point lead (38-33) heading into the half.
The Bandits took advantage of turnovers and a strong inside presence with the likes of seven-footer Brandon Gilback, who had 17 points and six rebounds, and another former Rattler CEBL champion Shaquille Keith, who added 16 points and six rebounds.
Fraser Valley Bandits will continue their season at home against the Niagara River Lions on Tuesday, June 29 at 7pm. Until fans are allowed back in the arena. All CEBL games will be available for live streaming on the CEBL’s new streaming service, CEBL+,
cbcsports.ca, the free CBC Gem streaming service, the CBC Sports App for iOS and Android devices, and also on Twitch.