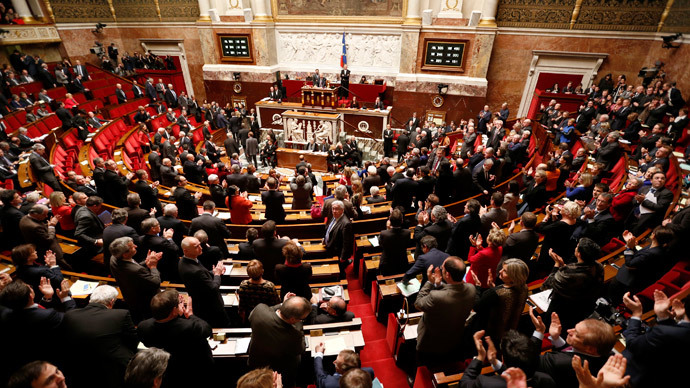 Paris: French National Assembly Tuesday voted for the recognition of a Palestinian state, a symbolic move aimed at rising diplomatic pressure to resolve decade-long peace process in the Middle East.

With 339 lawmakers in favour of the motion against 151 saying no on a Palestinian statehood, Paris is said to be the fifth European country to recognise Palestine as a state after Britain, Spain, Ireland and Sweden, according to Xinhua.

“We don’t want a symbolic recognition that will only lead to a virtual state. We want a Palestinian state that is real so we want to give a chance to negotiations,” said Minister for European Affairs Harlem Desir.

Presented by the Socialist lawmakers, the text said, “The two-state solution, consistently promoted by France and the European Union, implies recognition of a Palestinian state alongside that of Israel.” It added that considering Palestine as a state would help “obtain a final settlement of the conflict”.

Officials in Paris said the motion vote would not change Paris’ diplomatic stand but it aimed at making more pressure on both camps to bridge differences and end the deadlock.

“We must act to make progressing the implementation of peace which should be based on the co-existence of two sovereign and democratic states living side by side in peace and security,” Foreign Affairs Minister Laurent Fabius told parliament last Friday.

France proposed a UN-backed resolution to set two-year timeframe to reach a negotiated solution to end the impasse.

Shortly after the vote, Israeli embassy in France said the vote would “send the wrong message to the leaders and peoples of the region” and put off “possibilities to reach a peace accord”.

France’s upper house of parliament, the Senate will discuss the text Dec 11.