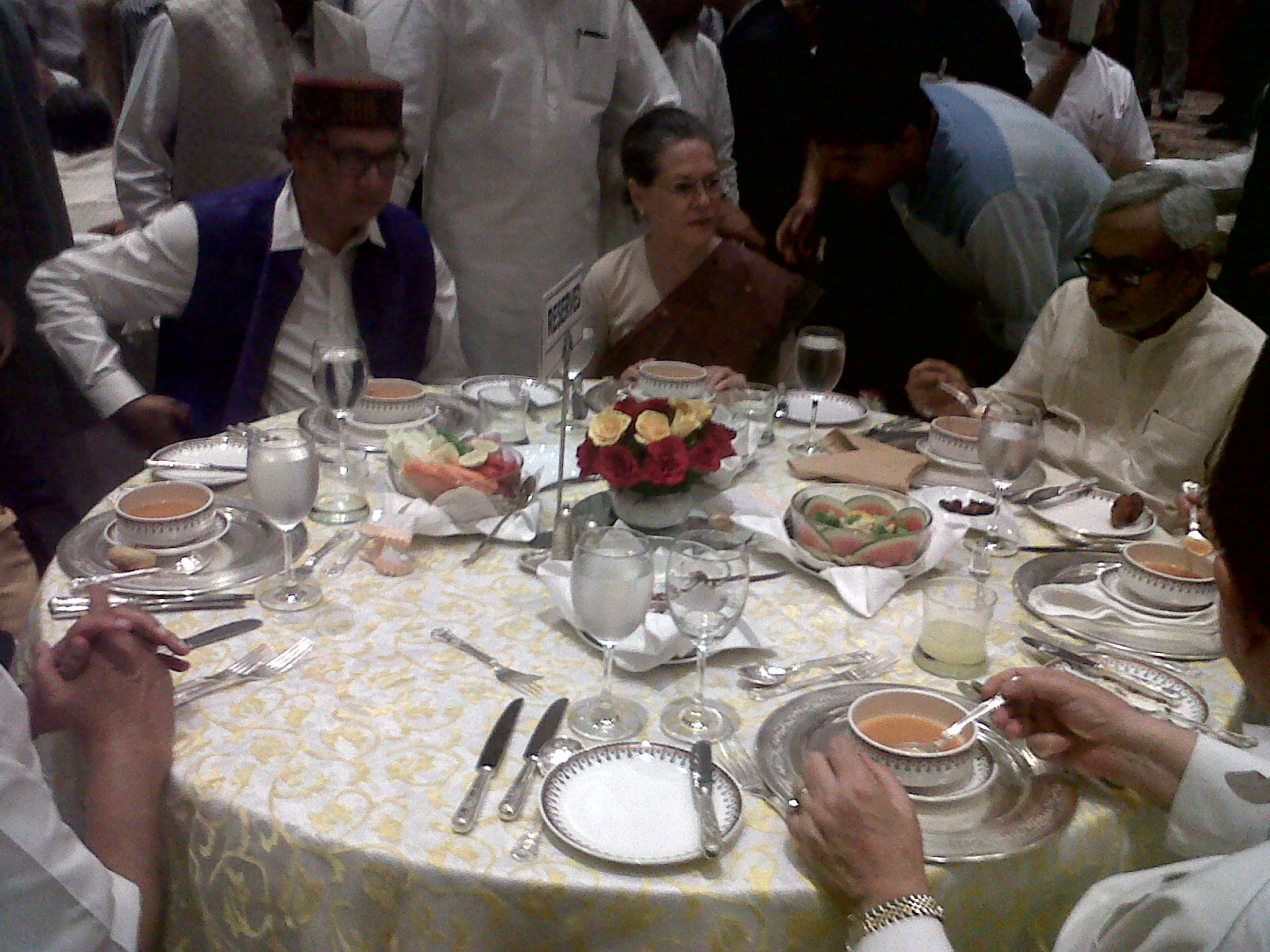 New Delhi, July 13 (IANS) A week before parliament’s monsoon session, it was a show of strength for Congress president Sonia Gandhi on Monday with leaders of prominent opposition parties including the JD-U, RJD, the Trinamool Congress, DMK, and the BSP present at an iftar she hosted though Samajwadi Party supremo Mulayam Singh was conspicuous by his absence.
Even though Rashtriya Janata Dal chief Lalu Prasad and Trinamool supremo Mamata Banerjee were not present, the leaders had sent their representatives. However, no one from the Samajwadi Party, which is a member of the Janata Parivar, was present.
Gandhi sat flanked by Janata Dal-United (JD-U) leader and Bihar Chief Minister Nitish Kumar and Trinamool leader Derek O’ Brien at a table at the iftar held at Ashoka Hotel here. Nationalist Congress Party leader Sharad Pawar was also seated at the same table.
Party vice-president Rahul Gandhi was on the adjoining table with DMK leader Kanimozhi, National Conference leader Omar Abdullah, JD-U chief Sharad Yadav and party leader K. C. Tyagi.
On the adjoining table to the left of Sonia Gandhi, former prime minister Manmohan Singh was seated along with Himachal Pradesh Chief Minister Virbhadra Singh, Bahujan Samaj Party leader Satish Chandra Misra and Rashtriya Janata Dal (RJD) MP Jay Prakash Narayan Yadav.
The Left parties were only represented by Communist Party of India-Marxist (CPI-M) leader Mohammad Salim, who put in a brief appearance, raising questions about the party’s toned-down presence.
Asked about Lalu Prasad’s absence, a senior Congress leader said that his presence was “politically more important in Patna at the moment”, attempting to brush away any insinuation of a rift.
However, he acknowleged that the absence of any Samajwadi Party leader and poor attendance of Left politicos was surprising given that the parliament session was to start in a week. He added this could be due to problems in co-ordination.
The Congress, JD-U and RJD are expected to contest the forthcoming Bihar elections together, but are yet to finalise their seat-sharing formula.
Both Sonia Gandhi and Rahul Gandhi appeared at ease and chatted with the guests on the occasion attended by most top Congress leaders and diplomats. Guests jostled around the two most important dinner tables at the Ashoka for an opportunity to capture the moment on their cameras.
Former Delhi chief minister Sheila Dikshit, Assam Chief Minister Tarun Gogoi and his Uttarakhand counterpart Harish Rawat were among the guests. Former union ministers P. Chidambaram, Sushilkumar Shinde, Salman Khurshid, Ghulam Nabi Azad, Mallikarjun Kharge, Kumari Selja, Ambika Soni and Mani Shankar Aiyar were also present.