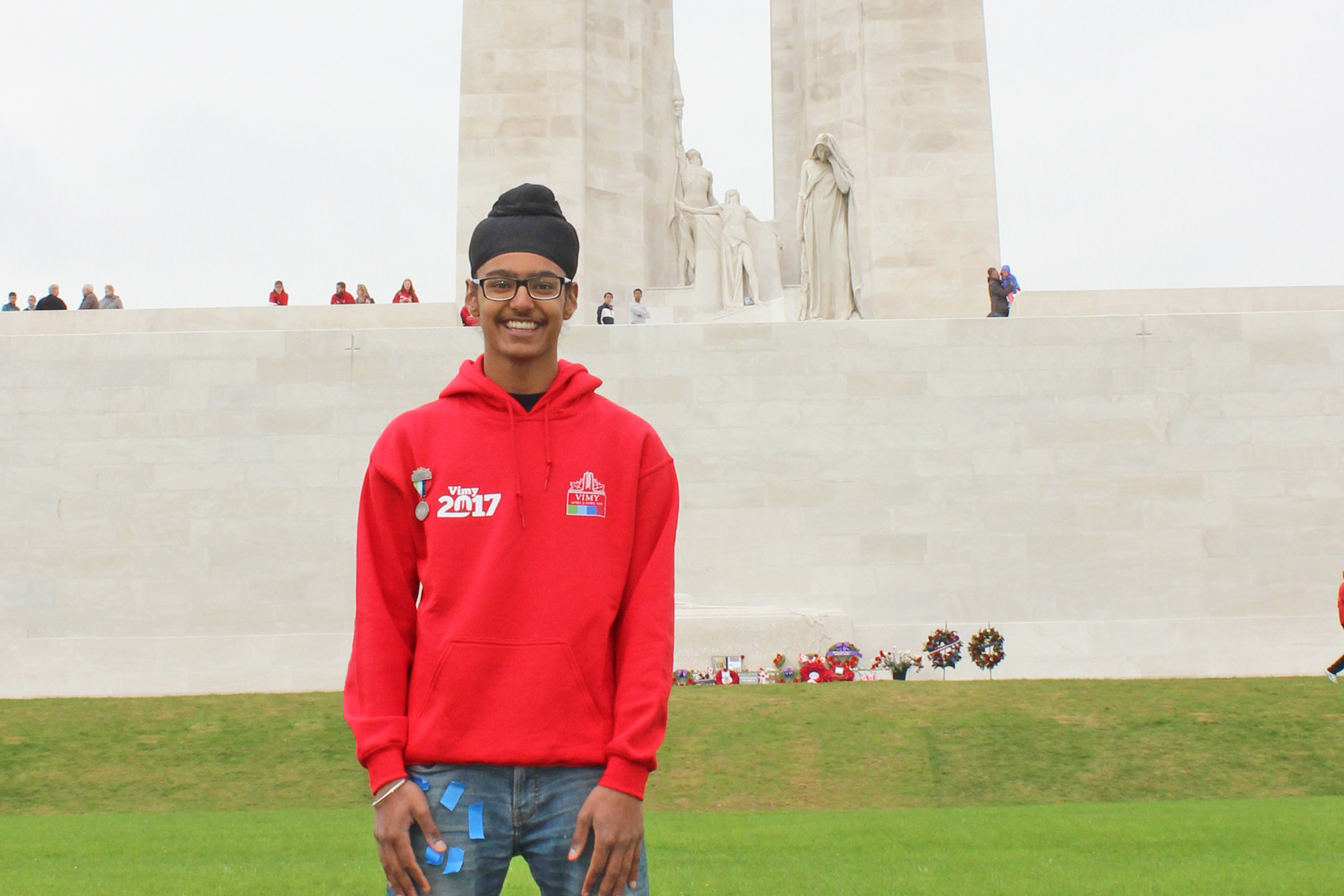 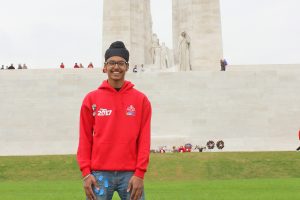 Several months ago, Asian Journal readers were introduced to Abhayjeet Singh Sachal (Abhay) as one of 17 students to receive the Vimy Pilgrimage Award and travel to the ceremonies marking the 100th Anniversary of the battle of Vimy Ridge.

Now back in Surrey, back in school, this young future leader is out to change the world, fueled by an encounter with the past because of his experiences on April 9, in northern France. He spoke with Ray Hudson about the event and how it’s shaping his future.

Abhayjeet: Before I went on the trip, I researched World War 1 and the battle of Vimy Ridge.  I also researched one specific soldier named Harold Bell, from Manitoba who at twenty-three years old, died at Vimy Ridge on April 9, 1917. So, I had all this background information before going to France and despite my luggage not arriving for three days and having to do everything in the clothes I wore on the flight, it was an amazing experience.

Ray Hudson: What was your first impression of this monument? 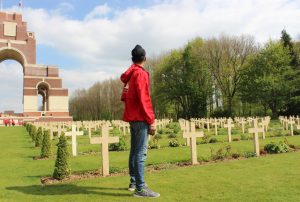 There were twenty-seven thousand people at the event, all trying to cram into this one line, so it took a while to get to the memorial. When I finally got in, it was amazing, so huge and so majestic. We went back a few days later to see and experience it better.

Just before we left I got an email telling me I was selected as one of five from the Canadian students to meet the dignitaries, so we five students got to sit in the front row.

The ceremony was very moving. Everyone was in the same mindset to be there, on the same land where the soldiers fought, a hundred years before. It really left an impact on me. The ceremony showed how people the same age as me fought here, and how it was the time when Canada was no longer seen as a colony of Britain, but gained respect as a nation.

When I was on the flight from Vancouver to Toronto, wearing a jacket with Vimy Ridge on it, a flight attendant started talking to me about the event.  He told me his great uncle fought at the battle of Vimy Ridge. After the ceremony when we returned to the Vimy Memorial again, I saw his great uncle’s name on the memorial. So I did a rubbing of the name, and I hope to send it to h 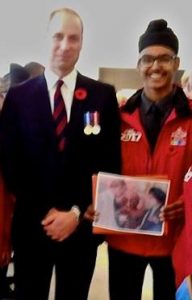 im, and stay in touch. That became really personal to me.

Ray Hudson: Were you able to do any follow up on Harold Bell, while you were there?

Abhayjeet: I saw his name on the Vimy Memorial. That was the most amazing thing, to see that this person I had been researching was right there on the memorial.

Ray Hudson: When you talked with your fellow students from around Canada, what kind of sense did you get from them about this event?

Abhayjeet: All of us had a passion to learn about the “Great War” as it was called, and we all came there for that reason. We were just the students who had applied for this award, and we had all talked about how war had affected us in our essays leading to the award. We had all researched the war, and the battle, so being there made it very personal.  Beyond that though, there were ten-thousand students who came from all across Canada, who paid to come.

Ray Hudson: Who did you meet at Vimy?

Abhayjeet: After the Vimy Ceremony, we were taken to a tent where we met David Johnson, the Governor General and talked about what it meant to be at Vimy. Then all of a sudden, Prince William walked into the room, right up to us and started talking. I found it was so easy to connect with him. It seemed like we’d been pals for a long time. We talked about the English language and the differences between the way it’s spoken in Britain and in Canada, we talked about Vimy and what it meant to all of us who came from across Canada to be together, and how important is was that we remember.  In a span of about three minutes we made a great connection with Prince William. Although we didn’t meet Prince Charles or Prince Harry, meeting Prince William was just amazing.

I knew going in that I’d be meeting members of the Royal Family, so I brought a photograph of my grandfather, who was a Brigadier in the Indian Army, and was President of the Indian Ex Servicemens League.  He got to meet Prince Phillip when he went to Barbados, so when we got our photo with Prince William, I held the photo in the shot. I thought it was amazing that it represented generation to generation, my grandfather to his grandfather.

After the Royals left, Prime Minister Trudeau stayed and spent time meeting people.  He came up to us and shook hands all around, took selfies with us and we had a conversation which was just as easy as it was with the Prince.

Ray Hudson: It was such a big event, what did you do when it was all over?

Abhayjeet: The entire week just flew by. We travelled across northern France, to Ypres, where we visited British, German and French cemeteries. I thought the environment of the German cemeteries was darker and gloomier, nothing like the British ones where there were flowers and the gravestones were larger. It seemed to symbolize how the war was viewed by the different nations.

Ray Hudson: There was a photo taken of you from behind at a graveyard.  Tell me about that?

Abhayjeet: I was visiting a cemetery in Ypres, Belgium, close to Flanders, and just looking out at graves when my friend took the photo. Whenever I look at it, it captures what I felt in that moment.

After World War One they said never again. People say they remember, but it’s really difficult to put that into practice while facing all the different issues in the world. I feel that we can tackle this through personal connection.  By travelling to Vimy, I had that personal connection. When I went to the Arctic I made that personal connection with students who had been affected by climate change and social issues.  Personal connection is so important. When we went through the trenches at Vimy, we learned of the horrible conditions the soldiers were fighting, living and dying in. Learning about that from a personal standpoint makes you think about it all.  Just being there in person, amongst all those dead, it really hits you.

Abhay and his older brother Sukh have started an organization called Break the Divide. Its first project is: “The connection between East High Secondary in Inuvik and Seaquam Secondary in North Delta has been established, and we are forming a national network of solidarity through friendship.” Students here can learn first-hand about suicide rates, eleven times the national average, and how climate change is affecting their communities. Recently Abhay took the message to Amritsar. The goal is to expand it across the world. We will hear more about this in the near future! https://www.facebook.com/BreakingDivides/