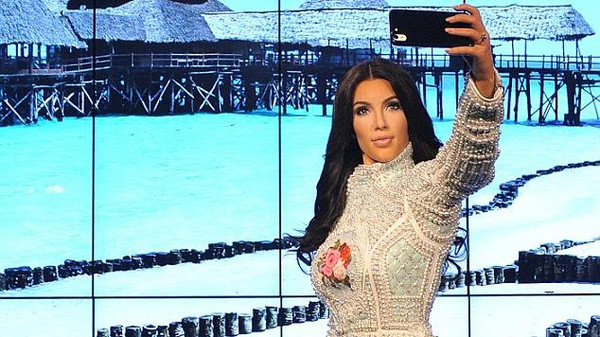 London, July 13 (IANS) Called the selfie queen, Kim Kardashian has made it to Madame Tussauds in style – hers is the first selfie taking wax installation at Madame Tussauds London.
Kim, 34, clad in one of her iconic evening gowns, has been fixed with an outstretched arm as she assumes the ultimate position in front of an array of changing backdrops in the new interactive attraction, Daily Mail reported.
The figure is looking up at the phone seemingly ready for a selfie. Madame Tussauds website said the outfit Kardashian’s figure is wearing was painstakingly recreated by Balmain Paris for the attraction.
Kardashian wore the elaborately beaded gown as she celebrated with friends and family ahead of her wedding on May 24, 2014.
The dress, originally designed by her friend Olivier Rousteing, along with the lifesize waxwork took a total of four weeks and £150,000 to complete.
The figure went on display last week and visitors have been taking selfies with it in front of changing backdrops.
Guests are able to slide up to the figure as if it was a real person. They then get to press the button on the cell phone she’s holding so they can take a selfie in front of varying backgrounds.
“When we were thinking about how we should portray Kim here at Madame Tussauds London, it quickly became obvious it had to be taking a selfie,” Edward Fuller, general manager of Madame Tussauds London, was quoted as saying while announcing the exhibit.