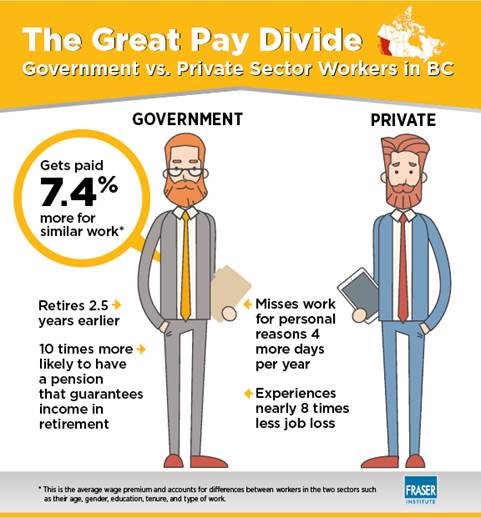 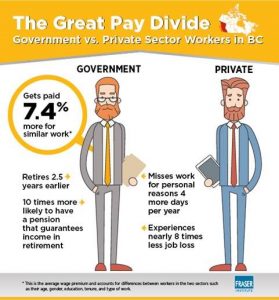 Vancouver: Government workers in B.C. receive 7.4 per cent higher wages on average than comparable workers in the private sector, and enjoy much more generous non-wage benefits, too, finds a new study by the Fraser Institute, an independent, non-partisan Canadian public policy think-tank.

As the B.C. government prepares to table its 2017 budget, and facing mountain financial pressure from increased education spending and a cooling off in the housing sector, staff compensation—which accounts for about half of annual government program spending—should be scrutinized.

“Bringing public sector compensation in line with the private sector would not only help governments in B.C. control spending without reducing services, it would also maintain fairness for taxpayers,” said Charles Lammam, director of fiscal studies at the Fraser Institute and co-author of Comparing Government and Private Sector Compensation in British Columbia.

The study finds that government employees in B.C.—including federal, provincial and municipal workers—received 7.4 per cent higher wages, on average, than comparable workers in the private sector in 2015, the most recent year of data from Statistics Canada’s Labour Force Survey.

And that wage gap takes into account differences between workers in the two sectors, such as their age, gender, education, tenure, and type of work.

But wages are only part of overall compensation. Government workers in B.C. enjoy much more generous benefits, too.

“Of course, governments in B.C. need to provide competitive compensation to attract qualified employees, but the fact is wages and benefits in the government sector are out of step with the private sector,” Lammam said.