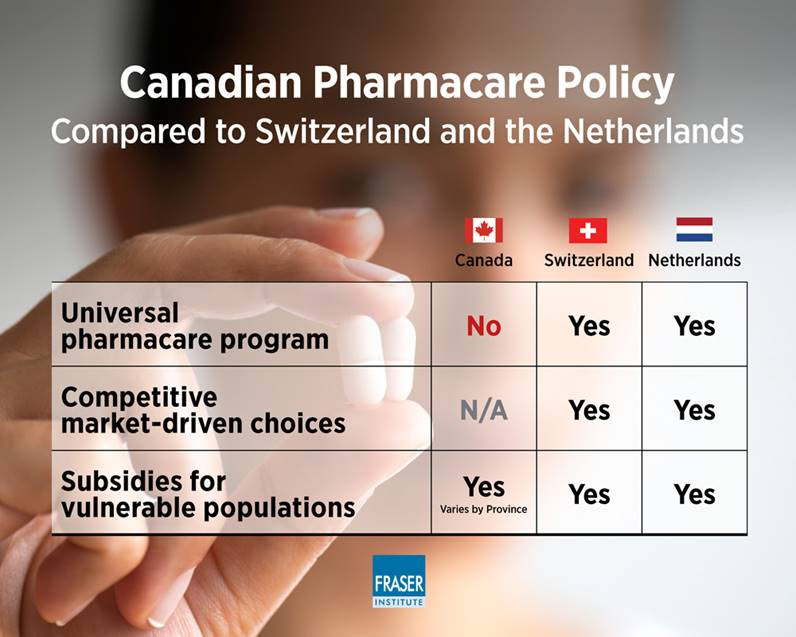 “Many proponents of national pharmacare note that Canada is the only industrialized universal health-care country that does not provide universal coverage for prescription drugs, but those same proponents often ignore the fact that other countries provide universal health care markedly differently than Canada,” commented Kristina Acri, professor of economics at Colorado College and the co-author of the study Universal Insurance for Pharmaceuticals in Switzerland and the Netherlands.

Both Switzerland and the Netherlands provide universal access for all health-care services (including pharmaceuticals) through a regulated—but competitive—market of private insurers. Individuals are required to pay health insurance premiums and are subject to some cost-sharing (co-payments and/or deductibles). Low-income citizens and those facing high drug costs are protected through premium discounts, cost-sharing exemptions and other public-safety nets.

“Canadians would be well-served if their governments recognize the successful universal health-care systems in other countries such as Switzerland and the Netherlands as a model for reform, including covering prescriptions drugs,” Acri said.

A sign of governments continuing to ignore these positive reform lessons from other countries is the federal government’s recent report on national pharmacare. It proposed a “single-payer” model where government (funded by taxpayers) pays for coverage, which would likely replicate many of the observed failures in Canada’s current single-payer health-care system.

“Before making a monumental change to pharmaceutical coverage in Canada, policymakers should consider broad health-care reform that would include new and better ways to ensure drug coverage for Canadians,” said Bacchus Barua, study co-author and associate director of the Fraser Institute’s Centre for Health Policy Studies.