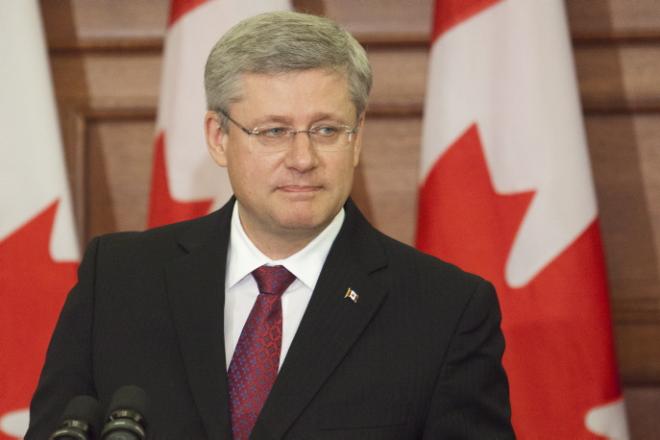 The Canadian Press
Ottawa: Stephen Harper shrugged off controversy Wednesday over his finance minister’s assertion that potential future problems created by his budget should be left to the prime minister’s granddaughter to solve.
Harper characterized Joe Oliver’s comments as a sarcastic bid to dismiss “a clearly preposterous argument” that boosting the maximum amount Canadians can put into tax-free savings accounts will drain billions from the federal treasury over the coming decades.
But opposition leaders pounced on Oliver’s remark as proof of their claim that the Harper government is making a fiscal mess and sticking future generations with the cost of cleaning it up.
“Leave it to our grandchildren. Really?” NDP Leader Tom Mulcair told the House of Commons.
“I have grandchildren and like so many grandparents I do not want to leave the responsibility for cleaning up the prime minister’s mess to my grandchildren.”
Liberal Leader Justin Trudeau chimed in: “Since when does Canada burden our grandchildren instead of building for them?”
Harper countered by citing numerous measures contained in Tuesday’s budget that he maintained will be of benefit to future generations _ including almost doubling to $10,000 the maximum individuals can contribute yearly to their TFSAs.
“Balancing the budget is good for future generations,” Harper said.
“Cutting taxes and allowing people to save and keep money in their own pocket is good for future generations. Giving money to Canadian families so that they can raise their children is good for future generations.”
Estimates provided by the parliamentary budget officer and the government itself suggest the federal treasury will lose more than $1.3 billion in tax revenue this year as a result of the TFSAs.
During an interview Tuesday on CBC, Oliver was asked about one economist’s estimate that doubling the TFSAs could cost the treasury almost $15 billion within a few decades.
“I hear that by 2080 we may have a problem,” Oliver responded. “Well, why don’t we leave that to Prime Minister Stephen Harper’s granddaughter to solve?”
Both Mulcair and Trudeau oppose doubling the maximum contribution to TFSAs, a move they argue will benefit primarily wealthy Canadians.
© 2015 The Canadian Press