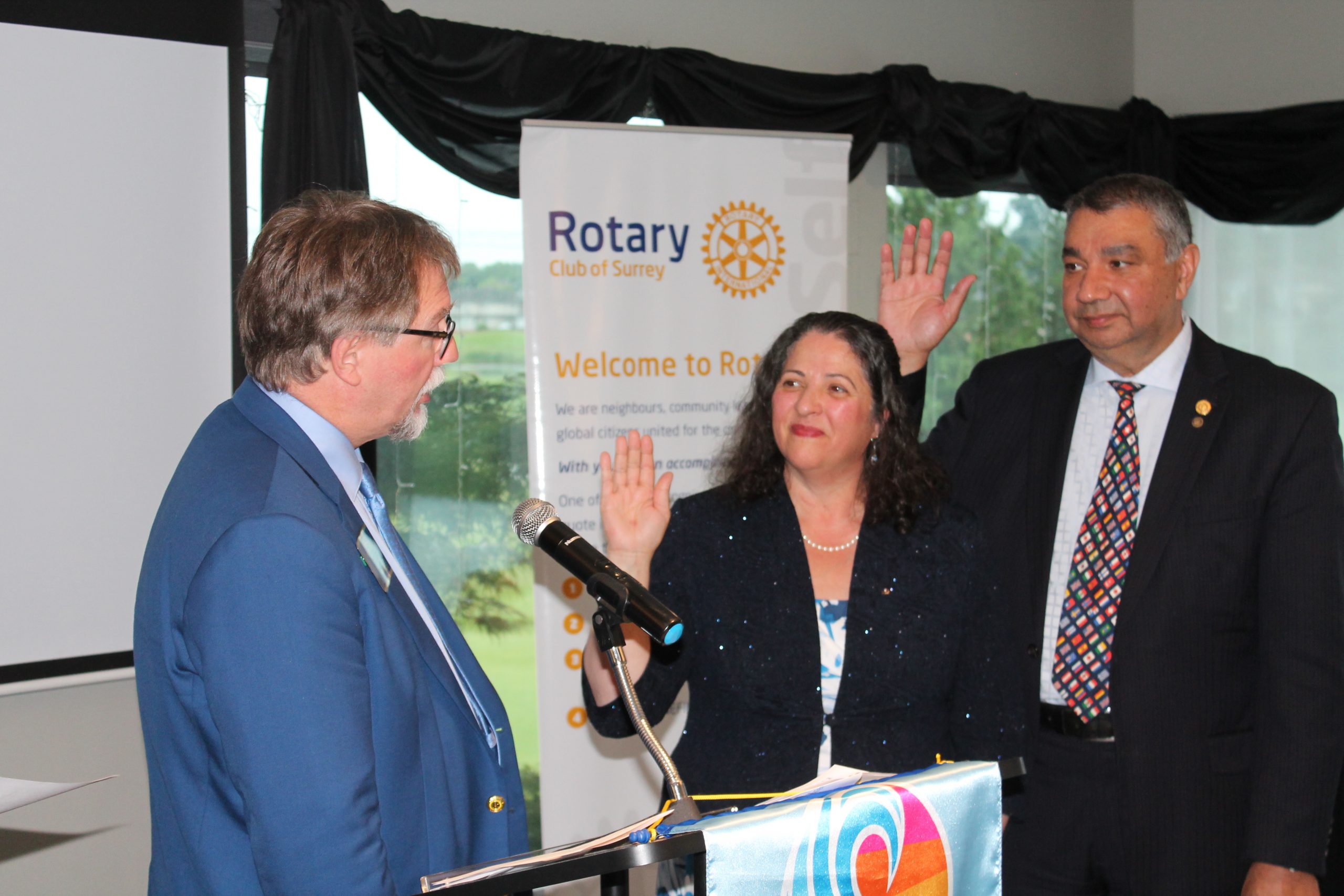 Surrey: Dave Hayer and Isabelle Martinez Hayer elected as Co-Presidents of Rotary Club of Surrey. Both took the oath from Brad Whittaker, Governor of the Rotary International District 5050. 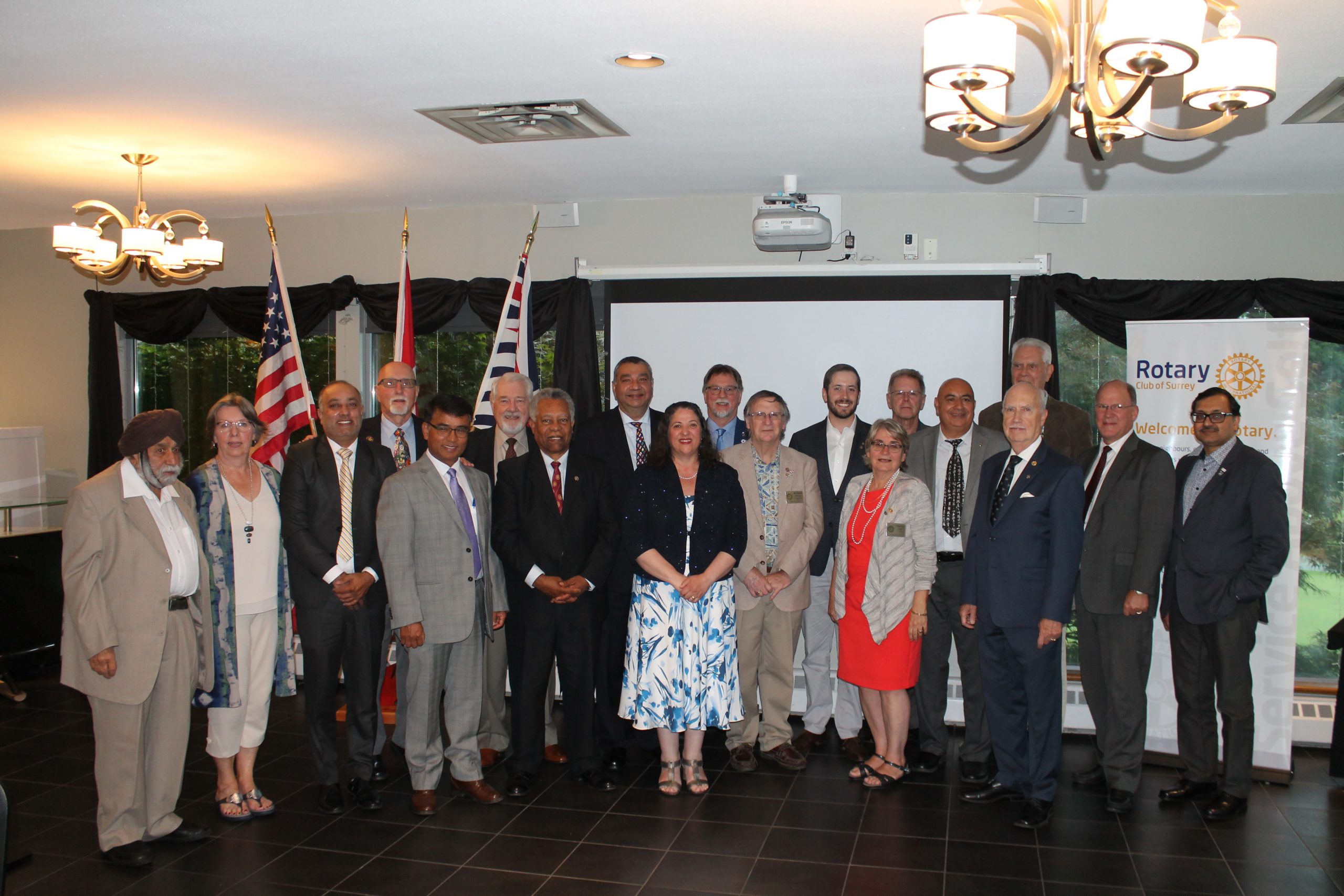 Hayer said “Isabelle and I are so proud to become Surrey Rotary’s Co-Presidents for 2019-2020” the ceremony took place at Rotary Club of Surrey’s Officers’ and Directors’ Installation Banquet at the Guildford Golf & Country Club on July 4,2019. “Previously I served as president of the Surrey Rotary from 1999 to 2000, and Isabelle served from 1997 to 1998. We want to give special thanks to those fearless warriors who are members of our club, who work tirelessly to help projects succeed, and help our club to have a meaningful impact in our community”.  Hayer went on to thank Past President John Edwards, Board members: Sam Sangha, Dick Wareham, Art Claxton, Deane Gurney, Dianna Sears, Garry Sass, Ely Golvin and Bryce McElroy; along with all exceptional Rotary members who dedicated their time and energy to the success of the club. “We look forward to working with all you. We are a Rotary family and we shine together!” said Hayer.

Rotary Club of Surrey was started in 1971 and is part of Rotary International. Rotary is a global network of 1.2 million members in over 35,000 Rotary Clubs spread around the world made of neighbours, friends, leaders, and problem solvers who see a world where people unite and take action to create lasting change across the globe, in our communities, and in ourselves.

For more than 110 years, Rotary International members have used their passion, energy, and intelligence to take action on projects around the world. Rotary clubs around the world work together to promote peace, fight disease, provide clean water, sanitation, and hygiene, help community needs, save mothers and children, support education, grow local economies.

Dave Hayer previously served as Member of the Legislative Assembly of British Columbia for Surrey from May 2001 to May 2013 and as the Parliamentary Secretary for Multiculturalism and Immigration from 2005 to 2011. On July 7, 2012, Dave Hayer announced that he would not seek re-election in the May 2013 Province election.

Hayer was a recipient of Her Majesty Queen Elizabeth II’s Golden Jubilee medal to commemorate the Fiftieth Anniversary of Her Majesty’s Reign as Queen of Canada in 2002 and in 2013 Hayer was presented with Queen’s Diamond Jubilee Medal by the Canadian Coalition Against Terror (C-CAT) for contribution to the advancement of sound public policy on terrorism issues in Canada.

In 2007, Hayer received a Pravasi Bharatia Samman Award from the Government of India, which is annually given to people of Indian heritage that no longer live in India, who have achieved excellence in their chosen fields of endeavour. The award was presented by Late A. P. J. Abdul Kalam, the President of India, at a ceremony in New Delhi, India for Hayer’s “active leadership in the community, his contributions to public service and for his achievements in government.” In 2007 Hayer was the second Canadian to be presented with this honour.

In 2008, Hayer was included by the Vancouver Sun in its list of the 100 top most influential Canadians of South Asian descent making a difference in BC.

In 2017, Dave Hayer was honoured with the presentation of his 3rd Paul Harris Award on July 10, 2017 by Surrey Rotary Officers.