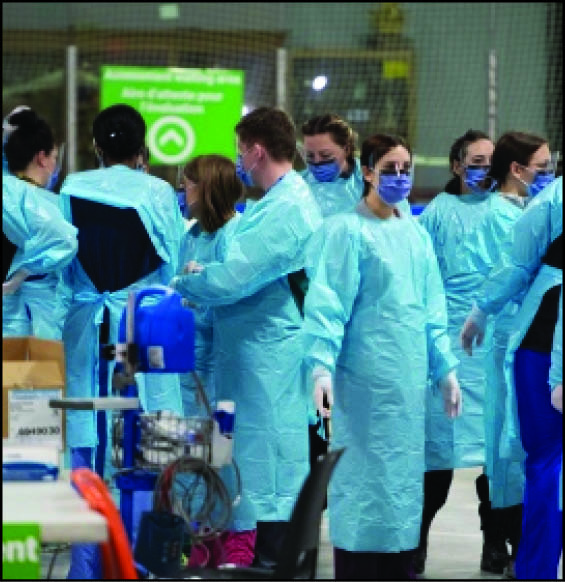 Ottawa: The federal government is set to table a budget Thursday against the backdrop of several national and international emergencies and major funding commitments.
Chief on that list is addressing Canada’s flagging health-care systems, which are stressed to the brink by two years of the pandemic and likely to continue to struggle under the weight of massive surgical backlogs.
While many of the problems the government looks to solve require multibillion-dollar solutions, groups representing burnt-out health workers say their top ask is a relatively cheap one: they want a plan.
“This human health resource crisis is really becoming extreme and it’s dramatically impacting our ability to care for people ,’’ said Dr. Katharine Smart, president of the Canadian Medical Association.
Doctors, nurses and other health workers have reduced their hours and left the industry in droves, their professional associations say, but there is no national plan to figure out exactly how many have been lost or how to replace them.
Several groups, including CMA, have banded together to ask the federal government to move forward on a human resources strategy, or even agency, that would count, track, train and retain health professionals to keep Canada’s systems afloat.
“It doesn’t make sense that in 2022, we don’t know how many personal care workers we have in this country. We don’t know how many nurses are going to retire,’’ said Linda Silas, president of the Canadian Federation of Nurses Unions.
Health professionals have been asking the federal government for a data-based plan for a decade now, Silas said.
“We were warning them, ‘you’re going to be hit with another shortage,’’’ Silas said. “If we want to continue supporting our cherished program, we need to support its workforce.’’
Smart said the initial cost to get the idea off the ground would be as small as $2 million _ a pittance in the scope of the federal budget. That relatively small sum could mean government gets more bang for their buck later, and Canadians get a better system, she said.
“You can fund it, fund it, fund it, but what are the outcomes we are getting? What’s the quality? How are we making sure our system is moving forward in a way that those investments are actually reaping the rewards for Canadians?’’ she said.
That’s not to say the government isn’t planning major spending to deal with the aftermath of COVID-19 and any future waves of the virus.
Health Minister Jean-Yves Duclos announced a $2 billion lump sum to help provinces work through the thousands of surgeries and procedures that were postponed during the pandemic.
Provinces, while grateful for the one-time cash, have clamoured for a sustained increase to the federal health transfer so they can make more systemic improvements to their systems.
The country’s premiers have repeatedly asked the federal government to grow its share of health-care costs to 35 per cent from 22 per cent an increase of about $28 billion.
They’ve also asked for minimum funding increases of five per cent annually, arguing the current three per cent means transfers don’t keep pace with yearly cost increases.
“We’re hopeful the federal budget will have a stronger commitment to help us keep up with the demands on our health-care system through increased, predictable and sustainable federal funding from the Canada Health Transfer,’’ said Selina Robinson, British Columbia’s Minister of Finance.
It’s unclear whether sustained health funding will make the budget, since Prime Minister Justin Trudeau has signalled in the past that he plans to wait until the COVID-19 crisis has passed before opening negotiations with the provinces and territories.
Instead the governing party has pitched more targeted funds, like a $250 million in the last election to expand access to family doctors and primary care teams in 2022.
By Laura Osman
The Canadian Press