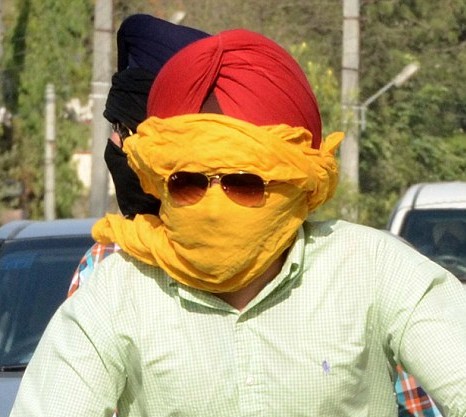 Hyderabad/New Delhi/Mumbai/Jaipur, May 28 (IANS) The searing heat wave continued unabated on Thursday in many parts of India, claiming another 414 lives in Andhra and Telangana alone to take the toll above 1,700 while rains brought relief in some states, officials said.

Andhra Pradesh reported 313 more deaths due to sunstroke during last 24 hours while 100 more succumbed in Telangana.

With this the toll in the two Telugu states rose to 1,774. While Andhra Pradesh accounted for 1,334 deaths, 440 people died in Telangana, officials said.

Four deaths due to sunstroke were reported from West Bengal and one from Bihar, in addition to two from New Delhi on Wednesday. According to unofficial sources, two dozen people have died in Bihar.

The Indian Meteorological Department (IMD) has warned that the heat wave conditions will continue at few places in Odisha, Vidarbha, Jharkhand and Telangana and at isolated places over Madhya Pradesh, Chhattisgarh and coastal Andhra Pradesh over next two days.

It has also forecast rain/thunder showers at most places in the northeast and at a few places in Jammu and Kashmir, Karnataka, Tamil Nadu and Puducherry.

No respite from the blistering heat was in sight in Andhra and Telangana as both states sizzled with the highest temperature of 47 degrees Celsius.

Khammam and Nizamabad in Telangana recorded 47 degree Celsius, as did Nandigama and Ongole in Andhra Pradesh.

According to the Meteorological Centre in Hyderabad, though rains brought the temperature down in some parts of coastal Andhra and Rayalaseema, severe heat wave conditions continued in the state.

The heat wave paralysed life in Rajasthan, which continued to reel under heat wave conditions on Thursday, with the maximum temperature hovering between 40 and 45 degrees Celsius.

The temperatures in some places, including state capital Jaipur was higher by 3-4 degree celsius above the average. Jaipur was hot at 44.7 degrees Celsius, four degrees above average, while Bundi and Kota were sizzling at 45.5 degrees and 45.4 degrees Celsius.

“The heat wave is likely to prevail in some places in Rajasthan in the next 24 hours. Jaipur will see partly cloudy skies with the possibility of a dust storm. The maximum and minimum temperatures will be around 44 degrees and 28 degrees respectively in Jaipur in next 24 hours,” a weather department official told IANS.

“Temperatures soared due to the dry spell. Shimla recorded a maximum temperature of 28.5 degrees Celsius, four degrees above normal (average) for this time of the year,” a meteorological department official told IANS.

It was a hot and dry Thursday in the national capital, with the maximum temperature recorded at 41.1 degrees Celsius, a notch above average. The met office forecast similar conditions on Friday, with the sky likely to be clear through the day and the maximum and the minimum likely to hover around 41 degree and 27 degree Celsius.

“People will have to wait for a few more days to get any respite from the prevailing severe heatwave,” said met office director A.K. Sen.

Vayas ji, the principal secretary of the state disaster management department told IANS that heat wave has claimed one life so far. However, unofficial reports received from different parts of state said that at least two dozen people have died in the last one week due to the heat.

Uttar Pradesh also continued to reel under the intense heat with the met office promising no immediate relief from the scorcher.

The weather office in Lucknow said maximum temperatures across the state were expected to rise further during the next 24 hours to Friday evening.

“Bundelkhand region and parts of western UP will see as much as three degrees rise in day temperatures,” said meteorological department director J.P. Gupta

Slight relief was experienced from the heat wave conditions in certain parts of Maharashtra’s Vidarbha and Marathwada regions though high temperatures ruled the roost in most areas on Thursday.

Chandrapur recorded the highest temperature of 47 degrees Celsius and Nagpur was second at 46 degrees, though the state has no officially recorded heat-wave related casualties.

Wardha, Akola and Parbhani recorded 45 degrees – a degree higher than Wednesday -while Yavatmal stood at 44 degrees on Thursday.

Intermittent drizzle and strong winds overnight brought welcome relief to Bhopal and other places in Madhya Pradesh which had been reeling under blistering conditions.

The residents of Bengaluru experienced pleasant weather on Thursday, while other parts of Karnataka braved a heat wave – the mercury at 42.5 degrees Celsius in Kalaburgi, 41.5 degrees in Bijapur and 42.4 degrees in Raichur, officials said.