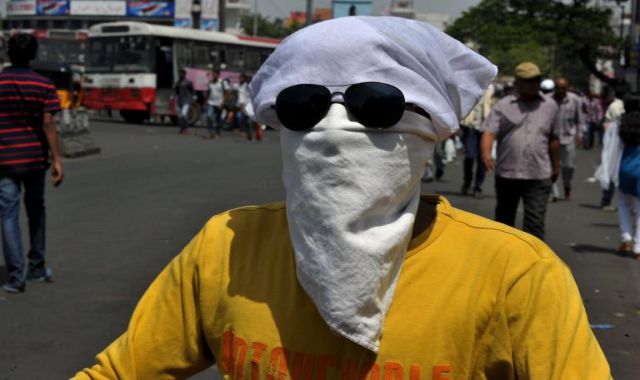 Hyderabad: The heat wave sweeping through Telangana and Andhra Pradesh claimed 90 more lives in the two states, taking the toll to over 800.

While 55 people succumbed to sunstroke in Andhra Pradesh, 35 were killed in Telangana.

The deaths reported on Tuesday have not yet been confirmed by officials.

Hyderabad Meterological Centre has warned that the heat wave may continue for another 24 hours.

Though there was slight drop in day temperature in Telangana, the state continued to be in the grip of heat wave due to the dry winds from north-westerly direction.

The highest temperature of 45 degrees Celsius was recorded in Hanamkonda, Khammam, Nalgonda and Ramagundem.

The temperature in most of the Telangana towns was above 42 degrees.

The mercury remained two to six degrees above average in the two states.

Rajappa told reporters that the heat wave claimed 551 lives in the state till Monday.

Chinna Rajappa, who holds the home portfolio, said the government has announced compensation of Rs.1 lakh each the families of the victims.

He appealed to people to take all precautions to protect themselves from sunstroke. He said there was a need to take extra care to ensure that the elderly and children are not affected by the heat wave.

According to officials, 81 deaths were reported in Andhra on Monday. The highest number of deaths (181) were reported on May 24. The heat wave claimed 151 lives on May 23.