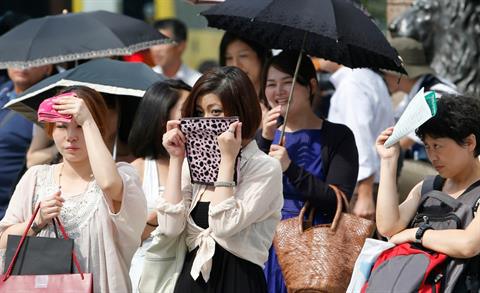 Tokyo, July 15 (IANS/EFE) Five people were killed and more than 3,000 hospitalised in Japan in a heatwave that swept the country last week, media reported on Wednesday.
The dead were elderly people who suffered from heat-stroke as temperatures crossed 39 degrees Celsius, accompanied by humidity of more than 63 percent.
At least 3,200 people, most of them over 65 years of age, were hospitalised across the country over the last eight days, Kyodo news agency reported citing government figures.
Eight of those hospitalised were in critical condition, according to state broadcaster NHK.
The Japan Meteorological Agency, or JMA, has advised residents of the regions most-affected by the heatwave to stay well-hydrated and avoid direct exposure to the sun.
Weather forecasts say the heatwave will recede from Wednesday onwards.
The month of June has been the hottest globally since weather records began to be kept around the end of the 19th century, JMA reported on Wednesday.
Average global surface temperature in June 2015 was 0.41 degree Celsius higher than the average registered between 1981 and 2010, and 0.76 degree Celsius above the average for the entire 20th century, according to JMA.