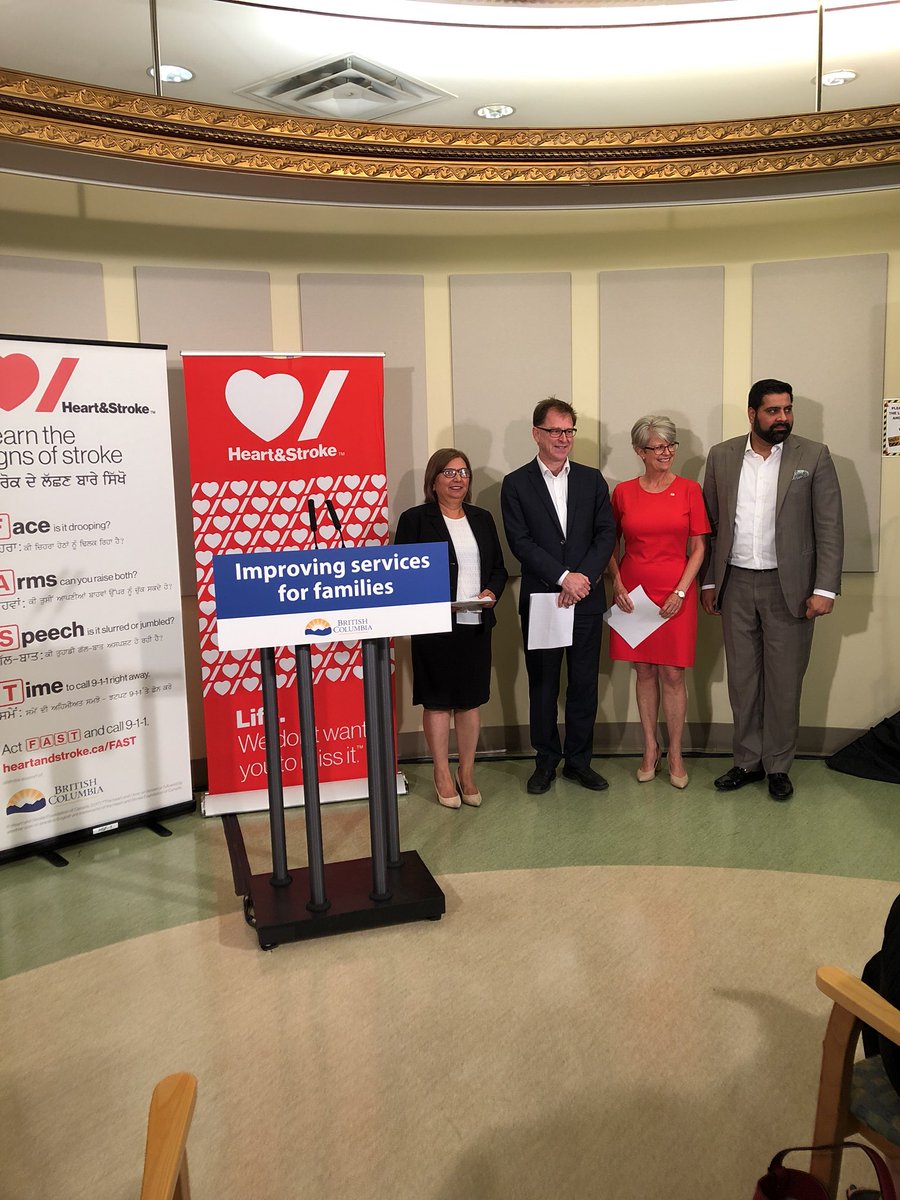 New Westminster: If the signs of a stroke are spotted – facial drooping, trouble raising both arms or slurred speech – it is time to call 911 right away.

That is the life-saving message being supported with $1.5 million provided by the Ministry of Health to Heart & Stroke’s FAST (face, arms, speech and time) signs-of-stroke campaign.

“Improving people’s awareness of stroke will have a tangible impact on improving the health of British Columbian families,” said Adrian Dix, Minister of Health. “People of any age or walk of life can have a stroke. The more people we support to think FAST, the greater chance people who do have a stroke will receive the time-sensitive care they need.”

In B.C., someone has a stroke every 80 minutes. It is the leading cause of acquired long-term disability, one of the leading causes of dementia and the third-leading cause of death in British Columbia. A stroke occurs when there is a disruption of blood supply to the brain. If this supply is not restored quickly, the affected part of the brain dies, causing disability or death. Every minute without oxygen after a stroke, 1.9 million brain cells die.

This expanded support from the Ministry of Health will help Heart & Stroke continue its signs-of-stroke awareness campaign throughout the province. The annual campaign, now in its fourth year, will reach British Columbians in various ways, including traditional media, social media and outdoor advertising, such as digital superboards. It will also add to the over 500 FAST decals on ambulances, and place posters in workplaces, community centres and health-care facilities.

The campaign highlights how all British Columbians can recognize and react to the signs that someone is having a stroke. It will expand to include a focus on the Mandarin, Cantonese and Punjabi speaking communities. For example, Heart & Stroke partnerships with organizations such as Fruiticana grocery stores and the Punjabi Press Club of BC will give a jump start to the campaign and help bring this vital message to the South Asian community.

“We are very grateful for the provincial government’s support of the FAST campaign,” said Adrienne Bakker, CEO of Heart & Stroke, B.C. and Yukon. “Through this partnership, we will continue to build on the progress we have made in raising stroke awareness, and improving recovery outcomes for people. Over the campaign’s three-year duration, the proportion of people who can name two or more major signs of stroke has increased from 14% to 53%.”

“Many people, including those in the South Asian community of which I am a member, do not know what a stroke is or understand common signs of stroke,” said Dr. Preet Chahal, stroke neurologist with the Royal Columbian Hospital acute stroke team. “I am very excited to see the FAST campaign being used to help raise awareness of the signs of stroke to enable patients to seek treatment faster, so that we can help save lives and minimize the long term effects of stroke.”

Approximately 8,100 people are admitted to hospital with a stroke or a temporary stroke, also known as a transient ischemic attack, throughout the province annually. Fortunately, British Columbia has the lowest stroke mortality rate in the country.

A number of factors can increase the chance of stroke, including high blood pressure, being overweight, eating an unhealthy diet, physical inactivity, smoking and excessive alcohol consumption. The Ministry of Health’s health-promotion strategy helps encourage British Columbians to develop healthier habits and live an active life in order to reduce those risks. These include programs aimed at decreasing tobacco use, increasing opportunities for physical activity, encouraging moderation when drinking alcohol, supporting healthy eating and promoting healthy body weights.