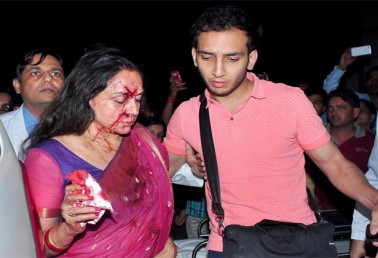 Jaipur, July 3 (IANS) Veteran film actor and BJP MP Hema Malini, injured in a car crash in Rajasthan that killed a girl child, remained in hospital on Friday even as her driver was arrested for rash driving.
Doctors at the Fortis Escorts Hospital said Hema Malini, 66, was stable and on liquid diet after undergoing a two-hour surgery here late Thursday following the accident near Dausa, over 50 km from Jaipur.
Her apparently speeding sedan rammed into another car coming from the opposite direction, leaving a two-year-old child in that vehicle dead and four others injured, including the parents of the dead girl.
Hema Malini — one of Bollywood’s best known actors — “is fine and conscious”, said Prateem Tamboli of the Fortis Hospital. “She is under our post operative intensive care unit.”
Doctors said earlier that may be discharged on Friday evening. But they told IANS later that the actor-politician will remain warded till Saturday morning.
Earlier, Hema Malini’s car driver, Mahesh Thakur, was arrested on charges of rash driving and causing death by negligence besides other offences, police said.
“We have arrested the driver, a resident of Vrindavan in Uttar Pradesh,” a police officer at Dausa told IANS over phone.
At the SMS Hospital in Jaipur, the distraught father of the girl who died was inconsolable while the injured mother kept asking “Chinni kahan hai?”, not knowing that her daughter was dead.
The family was even more hurt that neither the actor nor her aides bothered to ask about their well-being though, they say, the accident was caused by her speeding car.
The mother’s uncle, who did not wish to be identified by name, told IANS: “We have told the father, Hanuman Khandelwal, of the death of the child in the accident. He was shocked and has been crying since yesterday night. We try to console him but fail to do so.
“But we have not told the mother as she is still in a bad condition after the accident,” the relative said.
He said Hema Malini’s car was speeding, and this caused the accident.
The condition of those injured in the other car was “normal”, said a doctor at the government-run SMS Hospital.
Fortis Hospital said Hema Malini, after being brought in around 9.35 p.m., underwent urgent detailed investigations, including X-Ray and CT scan.
“It was confirmed she had laceration in paranasal area and on the forehead near the right eyebrow,” a hospital statement said.
“A surgery of debridement and repair of lacerated wounds surgery was done post midnight. The two-hour surgery was done under general anaesthesia.”
Her daughter Esha Deol and son-in-law Bharat Takhtani reached the hospital. Her younger daughter Ahana, who gave birth to a boy in June, did not visit her mother.
Rajasthan Chief Minister Vasundhara Raje called on Hema Malini. Medical and Health Minister Rajendra Rathore visited the other family and told the hospital to provide them free treatment.
Hema Malini, who made her acting debut in “Sapno Ka Saudagar” (1968) alongside Raj Kapoor, subsequently came to be known as Bollywood’s “Dream Girl” for her impeccable beauty.
From powerful roles in “Seeta Aur Geeta” and “Sholay” to performances in movies like “Satte Pe Satta” and “Baghban” — Hema’s acting career has spanned over four decades.
She was nominated 11 times for the Filmfare Award for Best Actress. She won once in 1973 for her role in “Seeta Aur Geeta”.
Hema Malini, also a Bharatanatyam dancer-choreographer, was presented with the Padma Shri, the fourth-highest civilian honour, in 2000. In the same year she was honoured with the Filmfare Lifetime Achievement Award.
In between her political commitments, she still finds the time to act as well as perform live. On the movie front, she will next be seen in “Shimla Mirchi”.
Married to veteran actor Dharmendra, a former MP, she has two daughters — Esha and Ahana.