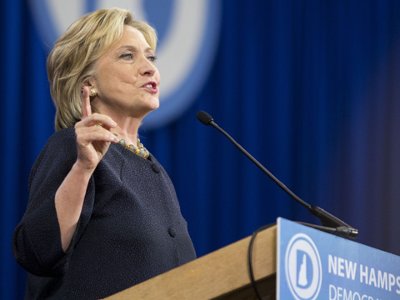 WASHINGTON: The prospects dimmed for the Keystone XL pipeline ever seeing the light of day, with a significant development Tuesday in the years-long debate over the Canada-to-Texas oil project.

The cause: Hillary Clinton.

The current frontrunner in most U.S. presidential election polls made the long-awaited announcement about where she stands on the project.

Her verdict: “I oppose it,” Clinton told a town-hall-style meeting in Iowa.

“I oppose it because I don’t think it’s in the best interest of what we need to do to combat climate change.”

It’s a stunning shift for a politician who’d previously said she was favourably inclined to it, and the latest example of the ever-strengthening political headwinds it’s encountered.

The announcement puts a severe dent in the plan of pipeline supporters to wait for the next president, should Barack Obama reject it as most expect.

From the campaign trail, Harper’s staff steered clear of criticizing Clinton. In a statement, a spokesman reaffirmed the project’s merits in creating jobs and continental energy security and avoided mentioning Clinton.

“This is not a debate between Canada and the U.S.,” said Harper’s campaign spokesman, Stephen Lecce.

“We know the American people support the project. We will not engage in presidential primary debates.”

Keystone would carry more than one-fifth of all of Canada’s oil exports to the United States, connecting to the already-built southern leg of the pipeline to Gulf Coast refineries.

It would carry that oil in a cleaner way than trains, according to a finding by Clinton’s own State Department which has concluded that greenhouse-gas emissions would be 28 to 42 per cent lower with the pipeline.

But opponents mounted a vigorous campaign to pressure Democratic politicians, especially Obama and Clinton, in the hope that blocking oil infrastructure might hasten a transition to a cleaner economy.

Clinton’s announcement will thrill most progressive Democrats, some wealthy donors, and the activists who’ve spent years pushing Clinton for an answer.

One group that was instrumental in making Keystone a national issue released a statement Tuesday that read like a celebratory obituary for the project.

“Thanks to thousands of dedicated activists around the country who spent years putting their bodies on the line to protect our climate, we’ve taken a top-tier presidential candidate’s ‘inclination to approve’ Keystone XL, and turned it into yet another call for rejection.”

The decision will be controversial with many voters in the centre and on the right.

If Clinton was hoping to bury the news on a busy day, it was a spectacularly timed news dump. Headlines about Clinton’s announcement streaked across TV screens and popped up on smartphones while Pope Francis was being greeted at an airport tarmac during his first U.S. visit.

Keystone became a presidential election issue within an instant of Clinton’s announcement. A Republican candidate for president happened to be sitting in an interview chair on Fox News when news of Clinton’s position was broadcast.

“Why?” was the reaction of Ohio Gov. John Kasich.

“You know why? Because she runs a campaign where she appears to serve interest groups.”

Even before Tuesday, another Republican candidate, Jeb Bush, had taken to talking about eventually approving the pipeline and improving what he calls battered relations with Canada.