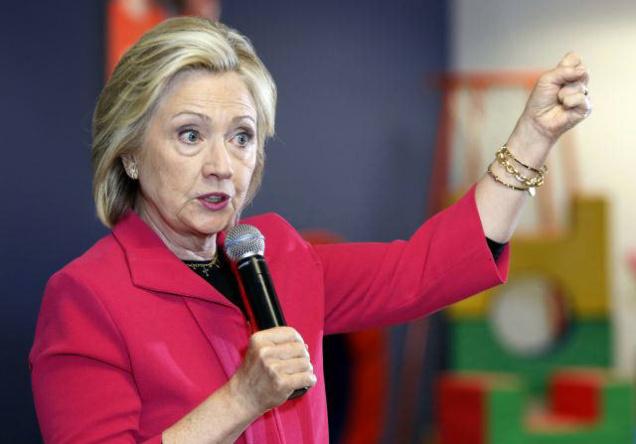 By Arun Kumar
Washington, July 1 (IANS) Democratic frontrunner Hillary Clinton continues to lead all 2016 presidential candidates including those in the crowded Republican field where Indian-American Bobby Jindal languishes at the 13th place, according to a new poll.
While the former first lady now holds a slightly slimmer lead among Democrats, former Florida governor Jeb Bush and real estate mogul Donald Trump are the only two Republican candidates holding double-digit support among Republicans, a new CNN/ORC national poll finds.
Louisiana’s Indian-American governor, Jindal, figures 13th in a field of 14 declared and two undeclared Republican candidates with just 2 percent support, though his backing has gone up from one percent last month.
Bush stands at 19 percent, up from 13 percent in May — and his best showing in CNN/ORC polling since December. Trump follows at 12 percent, up from 3 percent before his announcement.
Former Arkansas governor Mike Huckabee (8 percent), neurosurgeon Ben Carson (7 percent) and Kentucky Senator Rand Paul (7 percent) round out the top five.
Nationally, Clinton leads all other Democratic candidates by more than 40 points, with 57 percent of Democrats and Democratic-leaning independents behind her and 16 percent backing Vice President Joe Biden and 14 percent Vermont Senator Bernie Sanders.
The poll holds better news for Biden than it does for Sanders, who has made gains against Clinton in recent polling in Iowa and New Hampshire, the two states which kick off presidential campaigns of both parties with the first caucuses and first primaries respectively.
But Biden, who has not jumped into the race as yet, actually tops the list as national Democrats’ second-choice candidate, 35 percent say he’s their second pick, compared with 14 percent who say Sanders is, the poll found.
Looking ahead to the general election, Clinton continues to hold significant leads over Bush (54 percent to 41 percent) and New Jersey Governor Chris Christie (56 percent to 37 percent).
Clinton’s clearest advantage, however, is over Donald Trump, with 59 percent saying they would vote for Clinton if the 2016 match-up were between her and Trump, and 34 percent saying they would back Trump, the poll found.