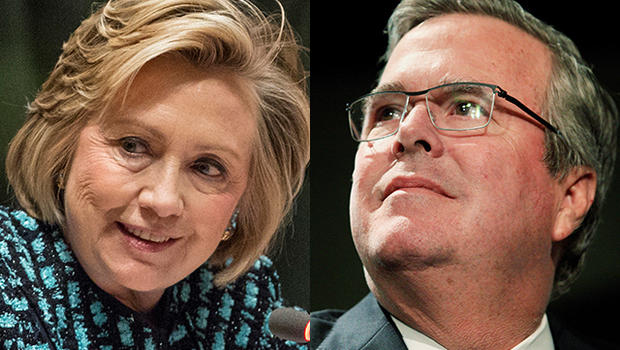 By Arun Kumar
Washington, April 20 (IANS) As the 2016 US presidential race gets going, Hillary Clinton dominates everyone on the Democratic side while Jeb Bush has a slight edge among the Republicans, a new poll said.
Democrats are broadly enthusiastic about the former First Lady and secretary of state’s candidacy, far more than they are for any other potential nominee, according to a CNN/ORC poll released on Monday.
Overall, 58 percent of Democrats say they would be enthusiastic if she won the party’s nomination with only about a quarter favouring Vice President Joe Biden for the party nomination (26 percent).
The recent formal entries into the Republican race by Marco Rubio, Rand Paul and Ted Cruz have stirred up the Republican field somewhat.
But former Florida governor Jeb Bush, son of a former president and brother of another, still has a small edge, the poll found.
Overall, 17 percent of Republicans and Republican-leaning independents back Bush for the Republican nomination, while 12 percent support Wisconsin Governor Scott Walker. Paul and Rubio stand at 11 percent each.
In general, Republicans see Bush as the best possible candidate to match up against the Democratic nominee in 2016.
But in hypothetical general election matchups against Clinton, Bush trails by a large margin, as do each of the other seven Republicans tested.
Marco Rubio fares best against the former First Lady, trailing Clinton by 14 points, 55 percent to 41 percent.
Bush trails Clinton by 17 points, 56 percent to 39 percent, while Paul falls 19 points behind Clinton’s 58 percent.
Democrats overwhelmingly see Clinton as holding several presidential characteristics. Nearly nine in 10 Democrats see Clinton as a strong and decisive leader (88 percent) and as having a vision for the country’s future (88 percent).
About eight in 10 say she represents the future of the Democratic Party (82 percent) and cares about people like them (82 percent).
Democrats are slightly less apt to say Clinton is honest and trustworthy, though three-quarters do view her as honest (75 percent), the poll found.
Conducted by telephone, April 16-19, among a random national sample of 1,018 adult Americans, the poll has a margin of sampling error of plus or minus three percentage points, CNN said.