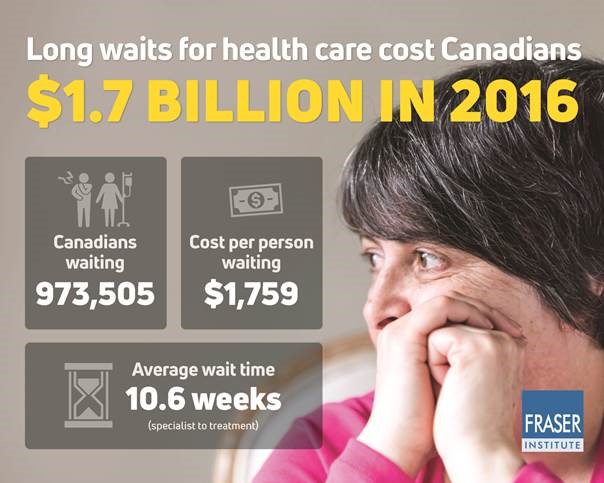 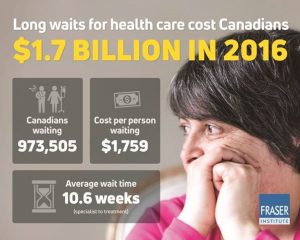 “Long wait times have real consequences for many Canadians who, in addition to experiencing increased pain and suffering, may lose income from not working and may also be unable to fully enjoy time spent with family and friends,” said Bacchus Barua, senior economist in the Fraser Institute’s Centre for Health Policy Studies and co-author of The Private Cost of Public Queues for Medically Necessary Care, 2017.

The study calculates the average personal cost of time lost during the work week in Canada last year for the estimated 973,505 patients waiting for treatments across 12 medical specialties including general surgery, orthopedic surgery, and neurosurgery.

When calculations are extended to include the value of time outside the traditional work week—evenings and weekends—the estimated cost of waiting jumps from $1.7 billion to $5.2 billion, or from $1,759 per patient to about $5,360 per patient.

The study draws upon data from the Fraser Institute’s Waiting Your Turn study, an annual survey of Canadian physicians who, in 2016, reported a median wait time from specialist appointment to treatment of 10.6 weeks—three weeks longer than what physicians consider clinically reasonable.

Crucially, the $1.7 billion in costs identified in this study are likely a conservative estimate because they don’t include the 9.4 week long wait to see a specialist after getting a referral from a general practitioner. Taken together, the median wait time in Canada for medical treatment was 20 weeks in 2016.

“As long as lengthy wait times define Canada’s health-care system, patients will continue to pay a price in the form of lost wages and reduced quality of life,” Barua said.

Because wait times and incomes vary by province, so does the cost of waiting for health care. Residents of Nova Scotia in 2016 faced the highest private cost of waiting per patient ($2,611), followed by British Columbia ($2,300) and Alberta ($2,188).

Average value of time lost during the work week in 2016 for patient waiting for medically necessary treatment (by province):