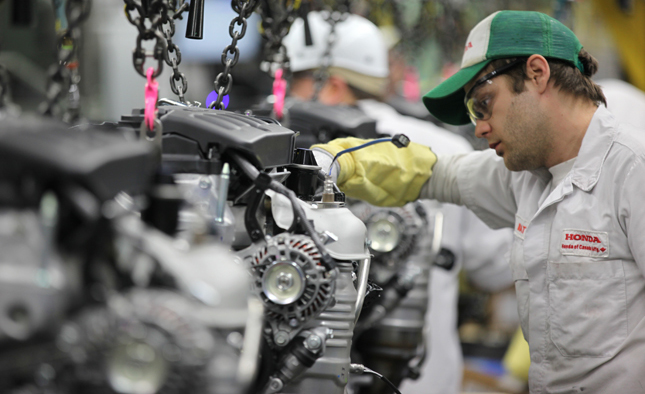 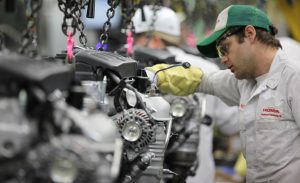 ALLISTON, Ontario:  Honda Canada is going to produce a new model for export to the European Union at its facility in Ontario.
This will be the first time Honda Canada will export vehicles to Europe.
The model in question is the cross-over CR-V.
Honda will upgrade its factory in Alliston, Ont., to meet the demand.
Prime Minister Stephen Harper was on hand for the announcement today.
He says the new free-trade deal with the European Union made the Honda exports possible.
Harper welcomed the announcement made by Honda Canada Inc.’s President and Chief Executive Officer Jerry Chenkin that its manufacturing facility in Alliston, Ontario, will produce the next-generation CR-V model destined for the European Union (EU) market. The Prime Minister was joined by Ed Fast, Minister of International Trade, and Dr. K. Kellie Leitch, Minister of Labour and Minister of Status of Women.
Prime Minister Stephen Harper said, “Our Government’s top priority is creating jobs and opportunities for Canadian businesses and ensuring Canadian businesses and investors have market access to remain globally competitive and prosperous. Honda’s decision to build its next-generation of EU-destined CR-Vs in Canada is a result of the historic free trade agreement we reached with the EU, which provides preferential market access to a half-billion new customers.”
This will be the first time that Honda Canada will export vehicles to Europe. Honda Canada’s decision was made possible by the historic market access provided by the Canada-EU Trade Agreement, which is paving the way for increased Canadian exports to the world’s largest integrated market of more than 500 million consumers.
Under the Canada-EU Trade Agreement, Canadian auto manufacturers will have the ability to export vehicles annually to the EU on a preferential basis under a flexible rule of origin. Under the Canada-EU Trade Agreement, the EU will eliminate the 10 per cent tariff on passenger vehicles providing Canada’s auto makers with a competitive advantage in the EU market. The EU will also eliminate, immediately upon entry into force of the Agreement, its tariffs on auto parts, which run as high as four and a half per cent. Based on production volumes, Honda Canada was the fourth-largest automaker in Canada in 2014, with 393,007 vehicles manufactured. Since 1986, Honda Canada has invested more than $3.9 billion in Canada, and each year it sources nearly $2.1 billion in goods and services from Canadian suppliers.
Honda Canada directly and indirectly employs more than 19,000 Canadians, including more than 4,000 in Alliston. The Canadian auto industry is highly export-oriented, with approximately 90 per cent of auto production exported every year. Canada’s world-class automotive industry is a key driver of the economy, contributing 10 per cent of the country’s manufacturing gross domestic product and 13 per cent of total merchandise exports. The industry employs approximately 117,000 Canadians directly and another 377,000 through its large supply chain of more than 730 companies, including many small and medium-sized enterprises across the country.
With files from The Canadian Press