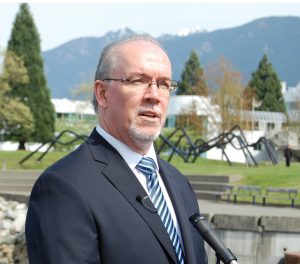 The federal approval of the Kinder Morgan pipeline shows Christy Clark has failed to defend B.C.’s coast. And British Columbians will pay the price.

In her response to the pipeline announcement Christy Clark made it clear she supports the project, despite the incredible economic and environmental risks. This short-sighted decision increased my resolve to stand up for our coast. I have made my position clear. New Democrats reject Kinder Morgan and its seven-fold increase in tanker traffic. The risks are too high for our environment and economy.

Instead of looking at the costs to our coast, to our economy and to families that live and work here, Christy Clark is listening to those with a pipeline to her office.

She failed to step up for B.C. when she had the chance. From the get-go Christy Clark undermined British Columbia’s ability to defend itself against this project’s environmental and economic risks. She has failed to listen to communities and First Nations who told her loud and clear that these risks were not ones they wanted to take.

Even a single spill could easily wipe out any economic benefits from this project, and the chances of a spill increase exponentially with more tankers going in and out of our harbours.

We can’t afford to put at risk jobs that depend on our multi-billion dollar tourism industry, film business, fishing and eco-tourism industries.

The data is in. The science is clear. British Columbians have made their voices heard. And we’re with them. We don’t want B.C. to become a super-export port for heavy oil.

That view is not confined to folks who live on the south coast.  People across the province agree.

There are better ways to build B.C.’s future – with a more sustainable economy and good jobs for people throughout B.C.

It’s about building respectful relationships with Indigenous people and First Nations by respecting their rights and Aboriginal title.

From start to finish Kinder Morgan speaks to the lose/lose bargain Christy Clark set up for British Columbians.

We believe there’s a better way.

We can defend our coast and create good jobs. We don’t need to give up one for the other.