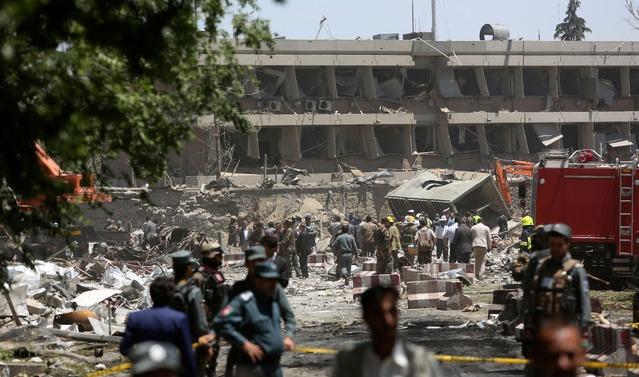 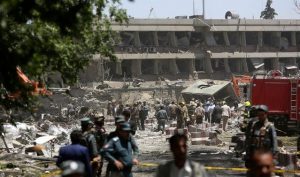 Kabul: At least 80 people were killed and over 300 injured, many critically, when a truck packed with explosives blew up during morning rush hour in the Afghan capital’s diplomatic zone on Wednesday, authorities said.

The truck, believed to be driven by a suicide bomber, exploded with a deafening roar at 8.22 a.m. in downtown Kabul when the roads were packed with motorists driving to work, Afghan media reported.

Mirwais Yasini, a lawmaker from the eastern province of Nangarhar who was at the site, said the explosion was so powerful that it caused a 15-metre crater and shattered windowpanes in a number of buildings, including some embassies.

The powerful blast, heard in several parts of Kabul, happened amid the holy month of Ramadan when work starts an hour late.

The Health Ministry put the number of dead at 80. Tolo News said most victims were civilians, a large number of them reportedly from the Roshan mobile company.

Pajhwok news agency quoted Najib Danish of the Ministry of Interior as saying that it was a suicide car bombing.

But Kabul Police spokesperson Basir Mujahid told Efe that the killer vehicle was a small sewage service truck loaded with explosives that was detonated in an area with heavy traffic. Other officials said it was a water tanker.

Shortly after the Taliban denied any involvement in the explosion, the Islamic State claimed responsibility for the bloodbath, Xinhua news agency reported.

Taliban spokesperson Zabihullah Mujahid said: “The Islamic Emirate (as the Taliban call themselves) condemn those blasts carried out against civilians and in which civilians suffer casualties without a clear target.”

The explosion occurred near Zanbaq Square close to the embassies of Germany, Turkey and Japan and in front of the National Directorate of Security (NDS) compound.

Afghan and foreign troops who rushed to the devastated zone were greeted by ghastly scenes.

Amid scattered body parts, some badly wounded men and women, their faces dripping with blood, desperately sought help. Many were rushed to hospitals in makeshift ambulances before rescue and police teams took over.

A few cars caught fire and a large plume of black smoke rose into the sky. Helicopters flew over the site.

Among the dead were two Afghan media workers, two Afghan guards at the German Embassy and nine security guards at a base for foreign forces in the area.

Windows in the Indian Embassy too were shattered but all staff were reported to be safe.

“The vigilance and courage of Afghan security forces prevented (it) from gaining entry to the Green Zone but the explosion caused civilian casualties in the vicinity,” a statement said.

A police officer said it was difficult to say who was the intended target.

Indian Prime Minister Narendra Modi, now in Spain, denounced the Kabul mayhem. “We strongly condemn the terrorist blast in Kabul. Our thoughts are with the families of the deceased and prayers with the injured.”

Afghanistan Chief Executive Abdullah Abdullah vowed to destroy the terrorists. “We want peace but those who kill us in the holy month of Ramadan aren’t worth a call for peace. They must be destroyed and uprooted.”

This was the worst terror attack in Kabul after March 2017 when 30 people were killed after terrorists dressed as doctors stormed Sardar Daud Khan Military Hospital.