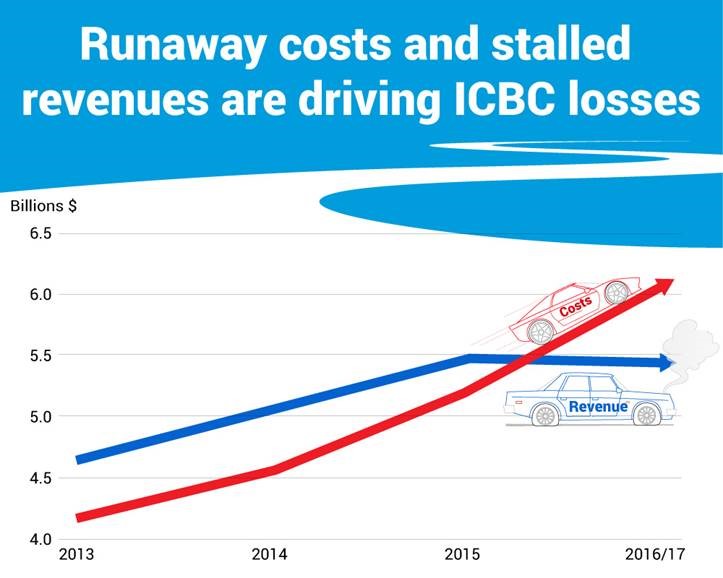 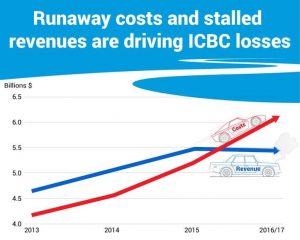 The current B.C. government recently acknowledged that ICBC was facing a $1.3 billion loss this fiscal year. Last year, it suffered a loss of $889 million.

“Previous B.C. governments failed to act when it came to difficult decisions at ICBC, and that inaction has led, in large part, to the current financial crisis which has been years in the making,” said John Chant, Fraser Institute senior fellow, professor emeritus of economics at SFU and author of The Decline and Fall of ICBC.

The study, a comprehensive account of ICBC’s financial troubles over the past few years, finds that costs have been rising for a number of years. For example, total claim costs increased 61 per cent between 2012 and 2017, and the average cost per policy jumped 40 per cent over the same period.

In the absence of cost containment measures, double-digit rate increases for basic insurance were required to offset the shortfalls.

For example, rate increases of 11.2 per cent in 2015, 13.6 per cent in 2016 and 20 per cent last year would have been required to offset the rising costs, but instead basic insurance rates only rose between 4.9 per cent and 6.4 per cent over the same period.

To cover the persistent basic insurance losses, between 2010 and 2017, ICBC transferred $1.4 billion from the profitable optional insurance business, which competes with other insurance providers, to the basic business, which has a monopoly over mandatory coverage. ICBC also transferred an additional $1.2 billion to the B.C. government itself over the same time.

But starting in 2016/17, the optional insurance business was no longer profitable and suffered a financial loss of $256 million.

“Faced with exploding costs, the previous B.C. government had a choice: contain the costs, take the unpopular decision to increase rates substantially, or enact large-scale reform of the basic auto insurance system in the province. In the end, the government chose to do nothing,” Chant said.

“ICBC’s current financial position is unsustainable and the kind of Band-Aid solutions they’ve used in the past simply won’t be enough to fix its problems moving forward,” Chant said.